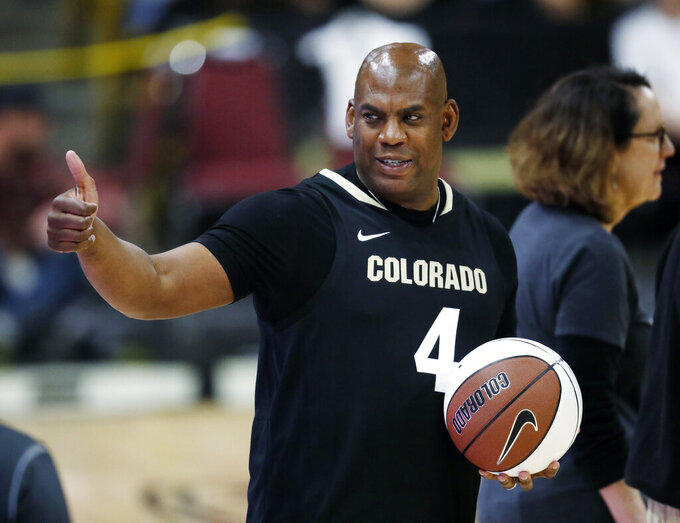 BOULDER, Colo. (AP) — Mel Tucker has the pedigree if not the players, the resume if not the roster.

Colorado's new head coach isn't cutting the Buffaloes any slack in his first season in Boulder, proclaiming, "We have high expectations right now."

No waiting on more recruiting classes.

And no limits to their thinking.

"A lot of people say, 'Do you just want to get to a bowl game?'" said junior linebacker Nate Landman. "No, we want to be a championship contending team." And for those who figure the Buffs can "get through one buffer year," Landman said, "that's not what his mindset is."

Tucker is in a hurry to win, and so are his captains.

QB Steven Montez is a senior and this could also be the final year in black and gold for Landman and junior receivers Laviska Shenault and K.D. Nixon, all of whom could fast-track their NFL opportunities if the Buffs have a bounce-back season.

Outside expectations aren't nearly as high for the Buffs, coming off a 5-7 season in which they dropped their last seven games, a slide that cost Mike MacIntyre his job. The Buffs were picked dead last in the Pac-12 South, same as they were in 2016 when they won the division.

Yet, Tucker inherits plenty of playmakers.

In Shenault he has one of the best players in the country and in Montez he has a fifth-year senior who can vault himself into the conversation of pro passing prospects that includes Tua Tagovailoa, Justin Herbert and Jake Fromm.

"Steven is a very smart player," Tucker said. "I've been really impressed with his intellect and how quickly he picks up the schemes ... He really runs a good show. He's got command of the huddle.

Some sub-plots that bear watching:

Montez is on a number of preseason watch lists, including the Maxwell, Earl Campbell and Davey O'Brien awards.

"We're not focused on winning individual accolades. We're trying to win football games," Montez said. "Winning awards is cool and all, but winning a whole lot of games this year is a lot better. Worlds better."

"I don't really deal with the outside noise," he said. "I just come in here every day focused on me, focused on getting the team better."

Shenault's little brother, Vontae, is a freshman wide receiver. Vontae is 6-2 like his brother but 30 pounds lighter at 190.

"It's definitely exciting," to have him on campus, the elder Shenault said. "I've got more time to get closer with him, get him better, make him a better man. So, it's definitely going to be exciting."

Sandwiched around a home game against Nebraska, the Buffs will face in-state rivals Colorado State and Air Force in Boulder for the first time since 1958.

"Rivalry games, that's what it's all about. That's what makes college football great and pro football as well," Tucker said. "There's not a day that goes by that somebody doesn't walk up to me and say, 'We've got to beat Nebraska.'"

COACHING EXPERIENCE: Tucker has spent 314 games as an assistant, split almost evenly between NCAA schools and NFL teams. He also went 2-3 as interim head coach of the Jacksonville Jaguars in 2011.

"The experiences I've had have been a tremendous asset for me," Tucker said. "There are going to be some things from 'Bama, from Georgia, from Ohio State that I've learned and that I'm going to install in Boulder."