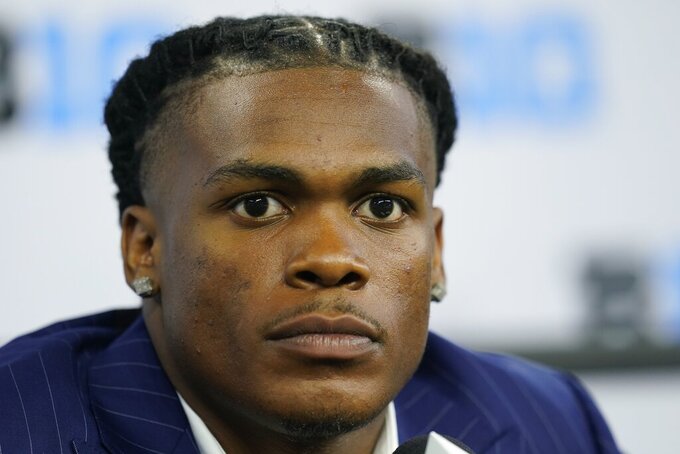 FILE - Penn State's Ji'Ayir Brown talks to reporters during an NCAA college football news conference at the Big Ten Conference media days, at Lucas Oil Stadium, Wednesday, July 27, 2022, in Indianapolis. “Having an opportunity to change other peoples' lives, that's what's cool about NIL,” said Penn State quarterback Sean Clifford. “It's not what we're doing or what I'm doing,” Clifford said, “it's about what Ji'Ayir came from to now where he's at, being able to impact a dude like that. (AP Photo/Darron Cummings, File)

Glance around the parking lot of the Woody Hayes Athletic Center at The Ohio State University this fall and you might come across a $200,000 palace on wheels, the kind of luxury ride more likely to be found in the garages of movie stars, music moguls and titans of business than on a college campus.

That's assuming Buckeyes quarterback C.J. Stroud hasn't swapped out his silver Mercedes-Benz G-Wagon for a Bentley or a Porsche, which his name, image and likeness deal with Sarchione Auto Gallery allows him to do every 45 days.

“It’s definitely changed my life for the future,” Stroud said of the several NIL deals to flow his way over the past year, “and I think it’s a jump-start to being a businessman before you get to the NFL, if that’s your path.”

More than a year ago, the NCAA lifted long-standing restrictions on players profiting from their celebrity status, and in some cases it turned elite players such as Stroud and Alabama quarterback Bryce Young into instant millionaires. But the financial benefits for some athletes are being weighed against the possibility that such deals will divide locker rooms, create tension within programs, produce an uneven playing field across college athletics and overwhelm students stretched for time.

“As far as NIL goes in the locker room, you see stuff, but no one ever talks about it," Oklahoma wide receiver Marvin Mims admitted. "It’s never like, a competition, like, ‘Oh, I got this much more money than you did. I’ve got this deal. You couldn’t get this deal.’ But you do notice the NIL deals that other guys are getting.”

College football has witnessed the biggest impact from NIL legislation, though athletes in all sports have tapped into the sudden cash flow. Of the estimated $1.14 billion that will be poured into the pockets of athletes in Year 2, the NIL platform Opendorse predicts nearly half of it will be spent on the gridiron.

The largest and most prominent deals are going to individual athletes who have successfully leveraged their exceptional ability, potential, influence and exposure: Young's portfolio is believed to have exceeded $1 million before he ever took a snap for the Crimson Tide, while Alabama teammate Will Anderson signed an NIL deal that allows one of the nation's best linebackers to drive a $120,000 Porsche Cayenne GTS.

At Texas, running back Bijan Robinson has deals with Raising Cane's restaurants, C4 Energy drinks and sports streaming platform DAZN, while also forging a partnership with an auto dealership for the use of a Lamborghini. At Notre Dame, tight end Michael Mayer has parlayed his first-round draft stock into deals with clothing brands Levi's and Rhoback.

They are precisely the types of endorsement contracts, and cozy relationships with boosters and businesses, that once landed players on suspension and programs on probation.

“I feel bad for the older players that didn’t have the opportunity to get money from this, like Braxton Miller, Cardale Jones, Justin (Fields),” Stroud said of the Ohio State quarterbacks who came before him.

“They should have made a killing,” added Stroud, who also works with Value City Furniture, Designer Shoe Warehouse and the trading card company Onyx Authenticated. “It’s just good that players have control now when it comes to money.”

Along with deals signed by individual athletes, collectives have become a major player in the NIL landscape. Some are organized by schools and others by boosters acting on their own, but both distribute money gathered from businesses and donors for everything from endorsements to meet-and-greets and charitable work.

The Foundation, a third-party collective at Ohio State, says it has raised more than $500,000 for Stroud, running back TreVeyon Henderson, wide receiver Jaxon Smith-Njigba and cornerback Denzel Burke. Texas Tech boosters have formed The Matador Club collective, which says it is signing all 85 scholarship players and 20 walk-ons to $25,000 contracts this season in return for appearing at club events and doing a certain amount of community service.

“I think we are well into the seven figures with all of our collectives,” said Morgan Frazier, a former gymnast at Florida and now the general counsel for Student Athlete NIL, which operates collectives at Penn State and several other schools.

Asked where the majority of money is going, she replied: “Overall, definitely football.”

It's almost impossible to determine how much players are earning from NIL deals, in part because reporting rules differ from state to state. The vast majority are relatively modest — perhaps $50 for a tweet or $100 for an autograph signing on platforms such as Cameo, vidsig and Engage. Rarely do deals exceed $1,000.

But for premier position players at marquee programs, with NFL potential and huge social media followings, the money on the table can be life-changing. Twelve college players have a valuation of at least $1 million entering this season, according to On3, a platform that uses an algorithm to factor such things as social media reach to project NIL worth.

More than 50 players have a valuation of at least $500,000, with most of those playing in the SEC and Big Ten.

“Having an opportunity to change other peoples' lives, that's what's cool about NIL,” said Penn State quarterback Sean Clifford, who founded Limitless NIL, which is believed to be the first agency created by an athlete to help other athletes. Its clients include Nittany Lions receiver Ji'Ayir Brown.

“It's not what we're doing or what I'm doing,” Clifford said, “it's about what Ji'Ayir came from to now where he's at, being able to impact a dude like that. And I'm proud to be able to say he was our first guy to jump on board."

The spoils can come at a price. For one thing, players who may have already struggled to juggle classes and study halls with practice and film sessions now must balance meet-and-greets, autograph sessions and other work.

“If you want to monetize or be compensated for all the hard work (and) sacrifice that you’re doing, this is part of it,” said Kansas State's Deuce Vaughn, a preseason All-American. “I've learned how to read a contract. I have a marketing agent. I've learned how to talk to companies, how to get on conference calls and things like that."

Vaughn also acknowledged the additional pressure to perform: “With that money comes expectations."

Then there's the often-combustible locker room atmosphere, where lines have always existed between haves and have nots. In the past, those might have been between walk-ons and scholarship players. Now, they could be between players driving exotic cars or wearing expensive jewelry and those trying to scrape together rent.

“I know it could be a distraction,” Robinson said, when asked what it's like driving his Lamborghini to practice. “If a teammate would bring it up, I would just joke around, be like, ‘Oh, man, but it’s not like what you're getting out there right now.' Just to not make it about yourself, because it's not about you.

“If you're not winning,” Robinson said, "none of us can get these NIL deals."