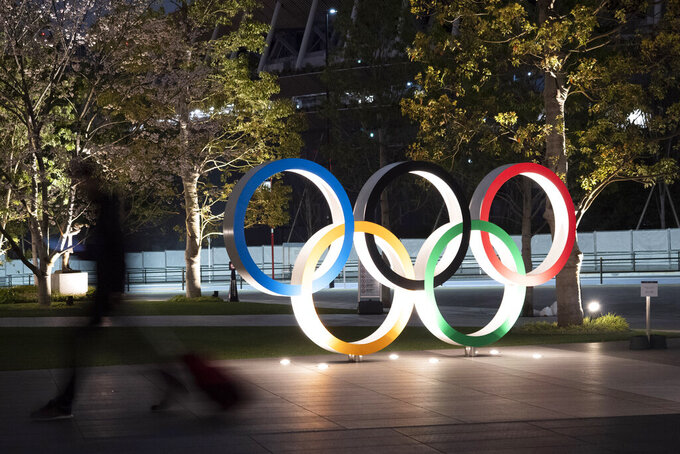 FILE - In this March 30, 2020, file photo, the Olympic rings are displayed in Tokyo. Elk Grove Village has a rose. A nice green one with five zeroes behind it. Now it is looking for the right partner. With Olympic leaders concerned about funding heading into the Tokyo Games, Elk Grove is looking to sponsor a U.S. federation in another bid to generate exposure for the Chicago suburb after it attracted some lucrative attention for its partnership with college football's Bahamas Bowl. (AP Photo/Jae C. Hong, File)

CHICAGO (AP) — Elk Grove Village is holding its own version of “The Bachelor.” It has a nice green rose with five zeroes behind it.

With Olympic leaders concerned about funding heading into the Tokyo Games, Elk Grove is looking to sponsor a U.S. federation in another bid to generate exposure for the Chicago suburb after attracting some lucrative attention for its partnership with college football's Bahamas Bowl.

While Elk Grove is looking to have a little fun with the project — it's asking for potential suitors to send in videos it plans to post online and show on its TV station — the Olympic movement also could benefit from a blueprint for more creative advertising and marketing deals.

The Tokyo Games were pushed back to 2021 because of the coronavirus pandemic, and the next Winter Olympics begin about six months later in Beijing — creating a challenging situation for some national governing bodies of summer and winter federations.

The U.S. Olympic and Paralympic Committee announced last month it was eliminating 51 positions and furloughing 33 more as part of a dramatic cut in staffing designed to trim up to 20% of its budget.

“Traditionally for an NGB or a sports team, there’s a set amount of categories or, you know, kind of more standard categories of companies that would spend,” said Dan Migala, the co-founder of 4FRONT, a sports marketing firm that is helping Elk Grove with the project.

There are signs that Olympic federations might be casting a wider net when it comes to potential sponsors. USA Triathlon announced a three-year deal with Connecticut-based Athletic Brewing Company last week, opening a new category for the NGB in non-alcoholic beer.

Chuck Menke, the chief marketing officer for USA Triathlon, said the coronavirus pandemic and the longer Summer Olympics cycle have affected how the federation works with its partners and potential sponsors.

“In the sense that we have to be sensitive to the landscape and to how different brands are being impacted,” he said. “So, for example, we were having several conversations prior to the outbreak of COVID-19, and many of those conversations have had to be paused, you know, and understandably so. So we’re trying to be very flexible.”

Elk Grove, which is just northwest of Chicago and borders O’Hare International Airport, is pivoting from college football to the Olympics after two years. The Bahamas deal — the first time a non-tourist municipality sponsored a bowl game, according to ESPN — led to valuable earned media for the village and a new Love’s Travel Stops & Country Stores fueling station.

Elk Grove trustees held a special meeting Monday morning and cleared the way for the village to send a formal request for a proposal to Olympic governing bodies. The sponsorship is worth $100,000 to the U.S. federation, and Elk Grove also plans to spend approximately $200,000 on commercials and digital marketing as part of its “Makers Wanted” campaign promoting a local industrial park.

Johnson said the bowl partnership worked out well for Elk Grove, but “it ran its course with us.” Patriotism is one of the biggest appeals when it comes to the possible connection with the Olympics.

“We're supporting, we're basically marrying ourselves with American-made products and American athletes and Elk Grove, the biggest business park in North America, we’re one of the biggest (makers) of American products in America,” Johnson said. “What a perfect marriage. So I think that's where the value is going to come out.”

Jay Cohen can be reached at https://twitter.com/jcohenap