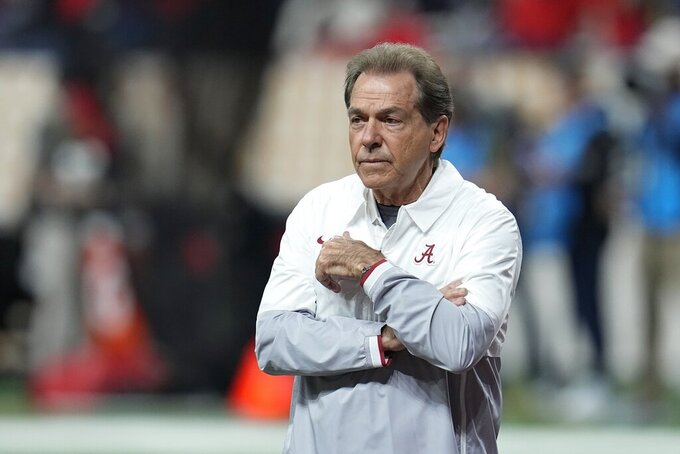 Saban was joined by NBA Hall of Famer Jerry West, a fellow West Virginia native, in a Jan. 13 letter penned to the Democratic senator ahead of the Senate's debate of the Freedom to Vote: John R. Lewis Act. The Senate took up the bill Tuesday, and it appeared headed for defeat.

The package before the Senate would make Election Day a national holiday and require access to early voting and mail-in ballots that became overwhelmingly popular during the COVID-19 pandemic. Voting advocates nationwide have warned that Republican-led states have passed laws making it more difficult for Black Americans and others to vote by consolidating polling locations, requiring certain types of identification and ordering other changes.

In the letter, the group said the principles that help ensure fair and free elections are “now under intentional and unprecedented challenge.”

“We are all certain that democracy is best when voting is open to everyone on a level playing field; the referees are neutral; and at the end of the game the final score is respected and accepted,” the letter reads.

The letter was also signed by former NFL players Oliver Luck and Darryl Talley, both of whom are West Virginia University graduates, as well as former NFL commissioner Paul Tagliabue.

The group said that lawmakers must “guarantee that all Americans have an equal voice in our democracy and that Federal elections are conducted with integrity so that the votes of all eligible voters determine the election outcomes."

The voting bill was the Democrats’ top priority this Congress, and the House swiftly approved the legislation, only to see it languish in the Senate, opposed by Republicans. With a 50-50 split, Democrats have a narrow Senate majority — Vice President Kamala Harris can break a tie — but they lack the 60 votes needed to overcome the GOP filibuster.

Attention is focused intently on Democrats Manchin and Kyrsten Sinema of Arizona, who were singled out with a barrage of criticism during Martin Luther King Jr. Day events for their refusal to change what civil rights leaders call the “Jim Crow filibuster.”

Martin Luther King III, the son of the late civil rights leader, compared Sinema and Manchin to the white moderate his father wrote about during the civil rights battles of the 1950s and 1960s — a person who declared support for the goals of Black voting rights but not the direct actions or demonstrations that ultimately led to passage of the landmark legislation.

Both Manchin and Sinema say they support the package, but they are unwilling to change the Senate rules to muscle it through that chamber over Republican objections.

Asked about the letter Tuesday, Manchin told reporters that Saban had added a footnote, that was not included in the released letter, saying he supports the filibuster and to not get rid of it.

“We should all support the right the vote, everyone, but not breaking the rules to make new rules,” Manchin said.