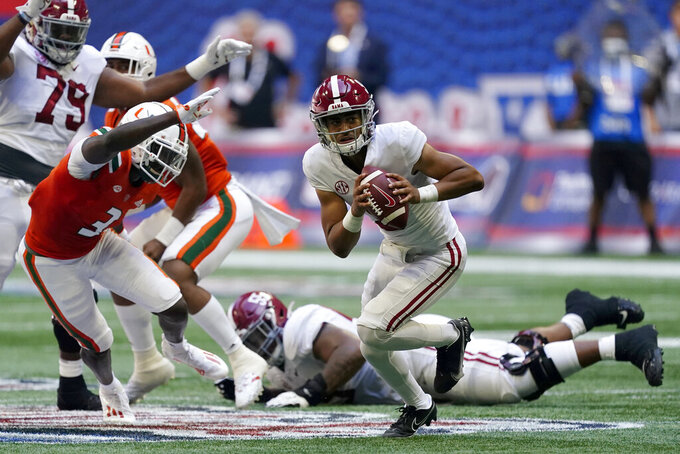 Alabama quarterback Bryce Young (9) scrambles away from Miami safety Gilbert Frierson (3) before throwing a touchdown pass during the first half of an NCAA college football game Saturday, Sept. 4, 2021, in Atlanta. (AP Photo/John Bazemore)

Alabama will finally have a true homefield advantage again, with a stadium mostly full of fans in crimson and white.

The top-ranked Crimson Tide shouldn't really need that kind of full-throttle support Saturday against FCS Mercer. But it will be refreshing nonetheless after a 2020 season with limited fan attendance because of COVID-19 and a neutral-site opener against Miami in Atlanta.

“It’s great to be home again to play a game in Bryant-Denny Stadium with fans,” Tide coach Nick Saban said. “Our fans were great in Atlanta, hopefully we’ll have a very passionate, enthusiastic full house for this game.”

Alabama did nothing to diminish its status as a favorite to repeat as national champions in that 44-13 opening victory, especially with an impressive starting debut from quarterback Bryce Young.

Mercer tuned up on NAIA Point in its opener, making this game quite a leap in competition.

“We’re getting ready to play the best college football team in the country. It’s a great opportunity to show you belong and that you can fight your guts out and compete," second-year Bears coach Drew Cronic said. “Whatever happens, we will get better. I have never gone into a game thinking we’re going to lose.”

Outside linebacker Drew Sanders, a five-star recruit in 2020, is set to move into the starting role. Chris Allen is expected to miss the rest of the seaso n with a fractured foot sustained in the opener. Sanders replaced him and had six tackles against Miami.

Transfers Henry To'oTo'o and Jameson Williams will make their debuts at Bryant-Denny, at least in Alabama uniforms. The Tide have won 54 of their last 56 games in Tuscaloosa.

To'oTo'o, a starting middle linebacker, made one tackle in his lone appearance there for Tennessee as a freshman in 2019. Williams, a receiver who transferred from Ohio State, knows Bryant-Denny's game day atmosphere by reputation only.

“All the guys keep telling me, like, ‘This stadium is like none you ever seen before,’" said Williams, who had a 94-yard touchdown catch against the Hurricanes. "So I’m just looking forward to it.”

Saban can describe Mercer's offense, if not label it. One thing he can say for sure is the Tide won't face one like it this season.

“The easiest way to categorize it would be there’s a lot of three-back runs, even though it isn’t what people would recognize as the wishbone,” Saban said.

He said it uses lots of motions and formations where the three backs are bunched up, not spread out.

“This is totally unique to anything that we’ve played against and will play against the rest of the season,” Saban said.