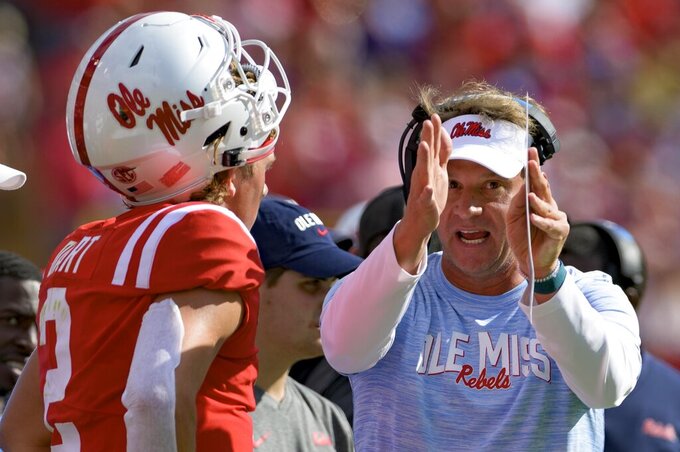 Quite well back then, it turns out.

As Alabama’s offensive coordinator, Kiffin only witnessed that response twice in three seasons, both coming at the hands of Hugh Freeze's Rebels.

“I thought he was phenomenal, not how you would maybe expect it to be the other way, like he comes in and everything's the end of the world like some coaches do,” Kiffin said. “He does a really good job of addressing exactly what it was” that went wrong.

It’s a particularly relevant topic this week. Alabama is coming off its second last-play loss of the season, a 32-21 overtime defeat by No. 7 LSU.

Coupled with another heartbreakingly close loss to No. 5 Tennessee, it's left the Tide outside of the national title hunt — barring a dominant closing run combined with a calculus of helpful losses by other contenders. Playing better and finishing strong amid talk that Alabama’s dynasty has faded will be motivation enough for now.

“We haven’t been in this position for a while, but at the same time we’ve got a lot of pride in what we do and want everybody to do it really well,” Saban said.

The Tide won eight straight after losing to Ole Miss in 2014 and its final 12 en route to the 2015 national title.

Kiffin defends his old boss amid speculation that maybe Alabama and Saban have lost their mojo, calling that “GOAT fuel.” As in greatest of all time.

The Ole Miss coach cited ESPN pundit Paul Finebaum's comment that “the window on the Saban dynasty is closing.”

“You're just giving the GOAT fuel, which for him that works and he goes and proves him wrong,” Kiffin said. “I really appreciate Paul saying that right after the game. I'm sure it was on (Saban's) desk Sunday morning.”

Alabama has barely beaten Texas and suffered both losses on the road, all coming down to the final seconds. The Tide also beat Arkansas away from the comforts of home but has had plenty of issues on the road.

However, a victory would be Saban's 27th road win over a Top 25 team, moving him into a tie with Joe Paterno for second behind all-time leader Bobby Bowden (33).

Quinshon Judkins starred at Pike Road High School just outside Montgomery, but didn't get a scholarship offer from Alabama. The Tide signed more highly rated running backs who aren't playing much behind Jahmyr Gibbs and other veterans. Judkins, meanwhile, is the nation's top freshman runner with 1,036 yards and 13 touchdowns.

No SEC freshman has reached 1,000 yards this fast since Florida's Emmitt Smith in 1987.

“We looked at him coming out last year and in hindsight, it’d be great if he was on our team,” Saban said.

Kiffin will try to become the third former Saban assistant to beat him in the last 14 months. The Alabama coach started 24-0 against ex-underlings-turned-head coaches before losing last season to Jimbo Fisher and Texas A&M and Georgia's Kirby Smart.

Alabama's offense may be hard-pressed to duplicate its recent success against Ole Miss defenses, given the way the Tide has been playing lately.