No. 10 Alabama visits No. 11 Mississippi in SEC West clash 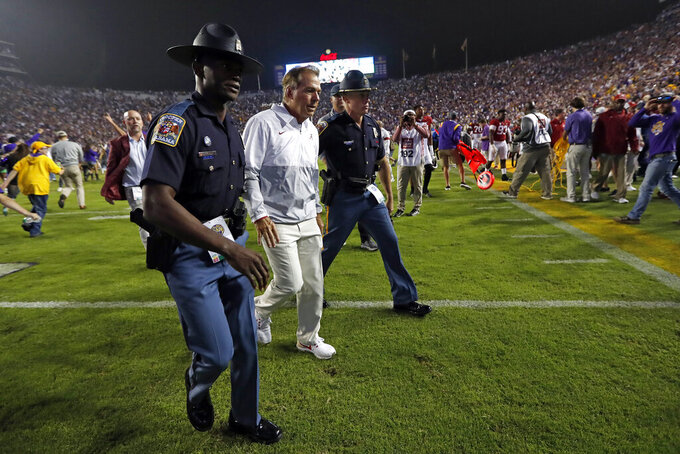 Alabama may well be out of national title contention with two last-play defeats. But the Crimson Tide still has the chance for a prominent bowl game and another season of at least 10 wins. So does Ole Miss, whose only loss came to No. 7 LSU, which just beat the Tide 32-31 in overtime. Alabama hasn't lost back-to-back regular season games since Nick Saban's debut season in 2007.

Alabama's defense against the Ole Miss running game, which is leading the SEC and ranks third nationally with an average of 267.4 yards a game. The Tide has mostly been solid in defending the run, giving up 104 yards a game on the ground. That's third-best in the SEC and 11th nationally.

Alabama: QB Bryce Young's chances of repeating as Heisman Trophy winner and leading the Tide to a national championship have faded. But he's still one of the nation's top quarterbacks and needs to find a way to help rally Alabama to a strong finish.

Ole Miss: RB Quinshon Judkins has been one of the league's best runners as a freshman. The native of Pike Road, Alabama wasn't offered a scholarship by Tide coaches, who might be regretting that now. Judkins has run for 1,036 yards and 13 touchdowns.

Alabama is 10-3 all-time in Oxford, and has totaled 173 points on its last three visits to Vaught-Hemingway Stadium. ... The Tide has averaged 56.7 points during its current six-game win streak over Ole Miss. ... Saban is 27-2 against former assistants, including two wins over Lane Kiffin with the Rebels. ... Saban could tie Joe Paterno for second all-time if he can pick up win No. 27 in true road games against ranked teams. Bobby Bowden leads the way with 33.