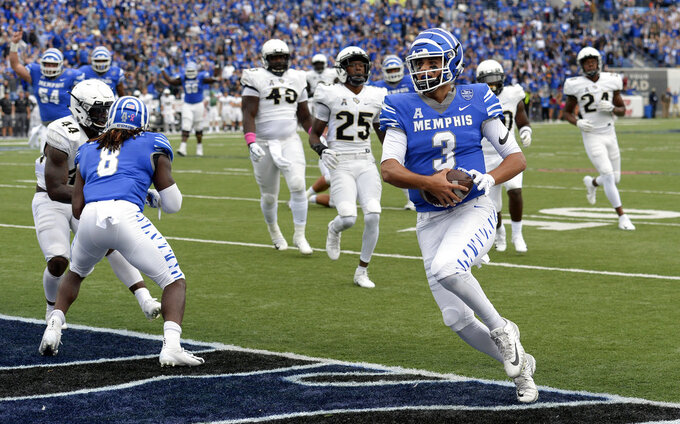 Memphis quarterback Brady White (3) scores a touchdown on a 11-yard run against Central Florida during the first half of an NCAA college football game Saturday, Oct. 13, 2018, in Memphis, Tenn. (AP Photo/Mark Zaleski) 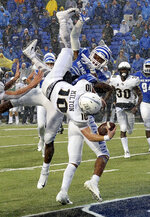 Facing fourth-and-1 in Memphis territory late in the third quarter and down 13 points, Heupel sent his offense back on the field and gave the ball to Taj McGowan. With the Tigers' defense bunched at the line of scrimmage, McGowan burst through the line and went 71 yards for a touchdown.

It was just what the Knights needed and they went on to beat Memphis 31-30 on Saturday, running their winning streak to 19 games.

"Huge momentum play in the game and changed the way the end of the third quarter and the fourth quarter was played," Heupel said, adding: "I just felt like it was an opportunity for us to extend the drive and get to the next play. Little did I know he was going to take it the distance."

McKenzie Milton threw for 296 yards to help the Knights to their 12th straight win over the Tigers. Milton's 7-yard touchdown with 12:14 left gave UCF (6-0, 3-0 American Athletic Conference) its first lead. The Knights trailed 30-14 with 2:04 left in the first half. The victory was by far the toughest game of the season for the Knights, who defeated their first five opponents by double-digits.

Even in the closing seconds, Memphis (4-3, 1-3) seemed on the way to at least have a chance for a game-winning field goal as the Tigers moved to the UCF 31. Memphis botched clock management in the final 30 seconds, getting hit with a motion penalty that required a clock runoff. Then Brady White completed a 9-yard pass to Tony Pollard and the seconds slipped away.

"Everybody was prepared and ready to go for this game," White said. "It was just a matter of not finishing."

Darrell Henderson, who leads the nation in rushing, had 199 yards and a touchdown on the ground on a career-best 31 carries for Memphis.

It was the first meeting since last year's American Athletic Conference championship game, which UCF won 62-55 in double overtime.

McGowan's scoring run in the third set the stage for Milton's winning score, capping a 74-yard drive. Rainy conditions stalled the offenses in the second half. Memphis managed 151 yards in the second half, 54 on the futile game-ending drive.

"We got off to a fast start, which we knew was necessary," Memphis coach Mike Norvell said. "We really did a great job in the first half. Unfortunately, in the second half, we did things that cost you against a great football team."

As for Heupel, he knew his team was challenged.

"I learned we're going to operate as a team," Heupel said. "We're going to come together when adversity strikes. We're going to continue to compete with everything we've got. We've got enough playmakers that you've just got to keep fighting when it's not going your way, and eventually you turn it in the right direction."

UCF: Milton, a Heisman Trophy candidate, led the Knights in a game where they struggled at time defensively. The go-ahead touchdown came as he was hit hurtling toward the goal line, barely making it to the end zone.

Memphis: The Tigers looked like the team that many thought would return to the AAC championship game most of the way, but now have three conference losses and are in rough shape in the West Division. Henderson, though, showed why he should be getting at least a little Heisman hype.

The Knights moved into the top 10 after last week's win over SMU, and could be moving up with some other highly ranked teams losing.

MEMPHIS: Plays a nonconference game at Missouri next Saturday.