No. 10 UCLA hoping to avoid slipup against Arizona State 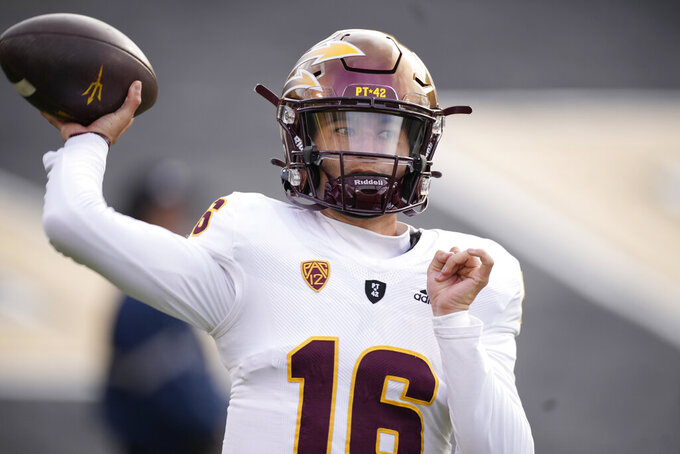 Another Pac-12 After Dark game.

“One thing that’s sad about playing those night games is the exposure that our student-athletes don’t get that other student-athletes get,” Kelly said. “There’s a bunch of really, really good football players here and at all the schools on the West Coast. And that’s one of the reasons why we’re excited about going to the Big Ten is that there’s better exposure for you by going to the Big Ten.”

The 10th-ranked Bruins are leaving with rival Southern California to the Big Ten in 2024, a move tied to finances along with exposure.

There's still plenty to play for until then.

UCLA (7-1, 4-1 Pac-12) is among four teams in the mix for two spots in the Pac-12 Championship game and three with a slight chance of advancing to the College Football Playoff.

The Bruins have the longest odds based on their weak nonconference schedule, behind No. 8 Oregon and No. 9 Southern California.

Any chance of cashing in on the longshot hinges on running the table and even that might not be enough. The Bruins were No. 12 in the initial CFP rankings on Tuesday, so it's a long hill to climb.

“It’s nice that we’re recognized as the 10th-ranked team in the country, but you got to keep winning," Kelly said. "If you lose next week, you’re not 10 anymore. The only way you can continue to move up is if you continue to win, so I think our guys have a really good understanding of that aspect of it.”

Trenton Bourguet had a memorable night for ASU against Washington on Oct. 8, leading the Sun Devils to a 45-38 win after Emory Jones was injured in the second quarter.

Jones returned to become Arizona State's starter, but when he faltered again in a loss to Stanford, Aguano gave Bourguet the nod against Colorado last week.

Bourguet made the most of it, setting a school record for most yards in a first career start with 435 yards with three touchdowns on 32-of-43 passing.

That earned him a shot at starting again against UCLA.

“Trenton will be our starter; I think he did everything right," Aguano said. "He plays with that moxie and that little bit of ‘it’ to him and our kids trust him.”

One of Arizona State's keys on defense will be trying to stop UCLA running back Zach Charbonnet.

It won't be easy.

The 6-foot-1, 220-pound back leads the Pac-12 with 137.7 yards rushing per game and has scored a rushing touchdown in nine straight Pac-12 games. Last week against Stanford, Charbonnet had 259 all-purpose yards, including a career-high 198 rushing.

“He's quick, he's got great change of direction, he's elusive in the hole, he gets his pads going downhill, he catches the ball out of the backfield and when he gets down low he can get extra yards because he's powerful,” Arizona State defensive coordinator Donnie Henderson said. “The bottom line is you've got to stop the run and he's the one managing the run, so you've got to get him stopped.”

For the Sun Devils to have a shot at the upset, they'll have to find a way to stop UCLA on third down.