No. 12 Utah reels off 3 straight wins, braces for Oregon St 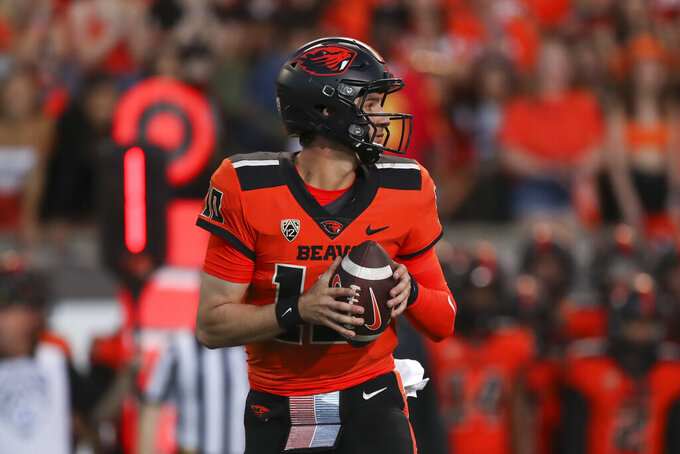 Oregon State quarterback Chance Nolan drops back to pass against Southern California during the first half of an NCAA college football game Saturday, Sept. 24, 2022, in Corvallis, Ore. (AP Photo/Amanda Loman)

Only, it wasn’t so noisy that day at Utah, with fans kept away in the 2020 contest due to coronavirus restrictions.

Still, Oregon State coach Jonathan Smith found the silver lining for his veteran QB: At least he stepped onto the field even if he didn't experience the thunderous noise.

Nolan and the Beavers (3-1, 0-1 Pac-12) take on their second straight ranked opponent when they travel to No. 12 Utah (3-1, 1-0) on Saturday. The Beavers are trying to bounce back from a 17-14 home loss to No. 6 Southern California where they surrendered the lead with less than 90 seconds remaining.

Rice-Eccles Stadium has been quite a home-field advantage since the arrival of Utah coach Kyle Whittingham. The Utes are 80-25 at home under Whittingham, including wins in 21 of their last 22 games.

The Utes have a tried-and-true formula with a stingy defense and a cool quarterback — in this case, Cameron Rising — running the show.

“What he’s done, he’s created an identity — both sides of the ball, and the style of player he recruits and develops there," Smith said. "A really smart schematic football coach. You can see these guys don’t make a lot of errors. They make (the game) physical. That’s been a mantra for them for a long, long time.”

The respect is mutual. Whittingham was impressed with the Beavers' performance against USC, when they nearly stunned the Trojans in spite of four interceptions.

“Jonathan Smith’s doing a great job up there. He’s really built that program back up the right way," Whittingham said. "We will have our hands full.”

Just like in 2020, when the Beavers trailed 30-10 in the fourth quarter before Nolan’s TD pass made it a six-point game. The Utes defense forced the Beavers to turn it over on downs to seal the 30-24 win.

The Utes lost a valuable part of their offense with the season-ending injury to captain and All-Pac-12 tight end Brant Kuith. The senior from Katy, Texas, ranks eighth in Utah history with 148 career receptions.

“We’ll miss (Brant). He’s a great leader. Great person,” Whittingham said. “It breaks your heart to see something like that happen to a senior.”

The Utes have senior Dalton Kincaid, who has 16 catches this season and four for touchdowns.

Whittingham started his weekly news conference by remembering defensive back Aaron Lowe, who was shot and killed at a house party on Sept. 26, 2021, hours after Utah’s game against Washington State. His death was after his good friend Ty Jordan died in an accidental shooting on Christmas night 2020.

Lowe changed his number to honor his friend, who had also been his teammate at West Mesquite High School in Texas. The Utes retired No. 22 in their honor.

“I just want to let Aaron’s family know how much they’re in our thoughts and prayers,” Whittingham said. “We miss him, and just want to make sure we acknowledge that. We always remember Aaron and Ty Jordan.”

Oregon State tailback Jam Griffin rushed for a career-best 84 yards against USC. The transfer from Georgia Tech has scored in the last two games. The Beavers also will utilize Deshaun Fenwick (49 carries for 233 yards and four TDs) and Damien Martinez (28 carries for 122 yards and one score).

“If a guy continues to separate over the next three, four games, then, yeah, maybe we’d have the one lead back," Smith said. "But we feel good with all three guys.”

Smith doesn’t plan to make a big deal about the elevation at Rice-Eccles (around 4,600 feet). He will have a chat with his kickers and coverage units.

“The ball’s going to travel farther,” Smith said. “On special teams and things, we’ll talk about that.”