No. 14 Michigan aims to stay unbeaten as it visits Wisconsin 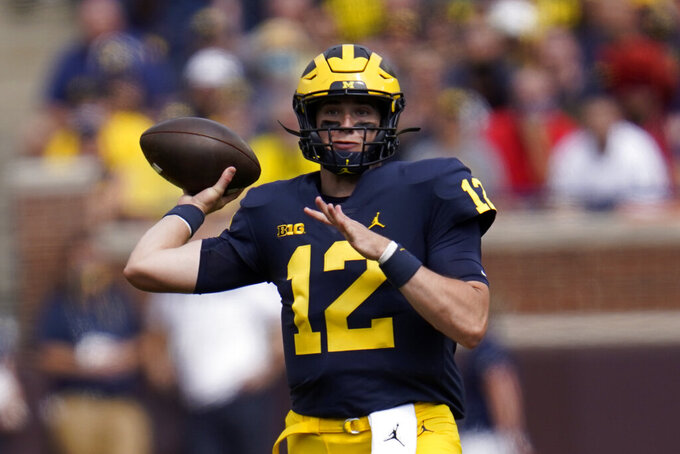 Line: Wisconsin by 2 1/2, according to FanDuel Sportsbook.

Michigan is seeking to win at Camp Randall Stadium for the first time since a 20-17 triumph in 2001. Michigan has lost in each of its last five trips to Madison. A victory would give Michigan its first 5-0 start since 2016, when the Wolverines won their first nine games but lost three of their last four. Wisconsin could use a win over a Top 25 team after losing its last seven games against ranked foes.

Michigan's running game vs. Wisconsin's run defense: Blake Corum and Hassan Haskins lead a Michigan rushing attack that has averaged 290.8 yards per game to lead the Big Ten and rank fifth among all Football Bowl Subdivision teams. Wisconsin is allowing the fewest yards rushing per game (23.0) and yards per carry (1.01) of any FBS team. Wisconsin has allowed just one touchdown run all season.

Michigan QB Cade McNamara. Michigan hasn’t needed much from its passing attack thus far because it has run the ball so effectively. McNamara has thrown just 53 passes through the first four games of the season, completing 62.3% of them for three touchdowns with no interceptions.

Wisconsin QB Graham Mertz. The Badgers desperately need him to take better care of the ball. Mertz has thrown six interceptions with only one touchdown pass this season, and he also had critical fumbles in losses to Penn State and Notre Dame. Mertz went 12 of 22 for 127 yards with two touchdown passes and no interceptions in Wisconsin’s 49-11 victory at Michigan last season.

Although Michigan and Wisconsin are in different Big Ten divisions, this will mark the sixth straight season in which they have played each other. … Wisconsin is trying to beat Michigan for a third straight time. The only time Wisconsin has won three straight over Michigan was from 1959-62. … Wisconsin is honoring Barry Alvarez at Saturday’s game. Alvarez retired as Wisconsin’s athletic director this year and coached the Badgers from 1990-2005. … Michigan is averaging 40.25 points, ranking 16th in the country and second in the Big Ten. ... Corum is averaging 180.75 all-purpose yards to lead the nation. He ranks ninth in rushing with 118.8 yards per game. ... The Wolverines haven’t turned the ball over and have allowed only one sack. Wisconsin produced six sacks against Notre Dame.