No. 14 Michigan seeks first victory at Wisconsin since 2001 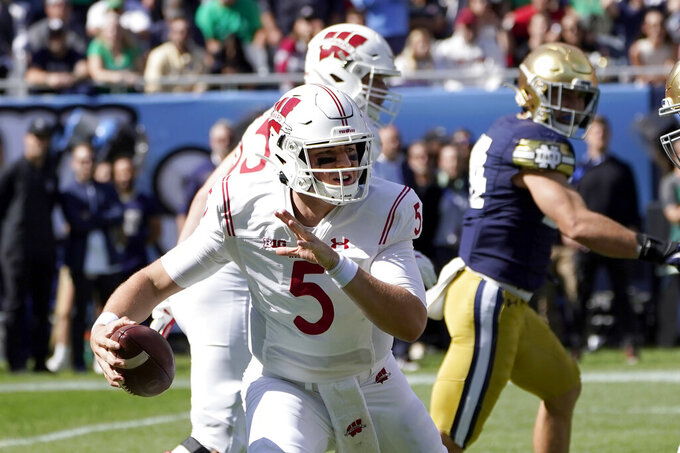 Michigan has suffered plenty of disappointment each time it has visited Wisconsin over the last couple of decades.

Wisconsin has felt similar pain whenever it has faced a ranked team lately.

Wisconsin has dropped each of its last seven games against Top 25 teams, including losses to Penn State and Notre Dame this season. Michigan has lost its last five games in Madison and hasn’t beaten Wisconsin at Camp Randall Stadium since a 20-17 decision in 2001.

“It’s exciting to have this opportunity — this challenge — to see how far this football team’s come, see if we can win on the road, meet that challenge,” Michigan coach Jim Harbaugh said. “We’re preparing for it. It’ll be a big task, no question about it.”

Wisconsin has an equally big task after dropping two of its first three games. The Badgers, who were ranked 12th to start the season, have the nation’s worst turnover margin and allowed the final 31 points in a 41-13 loss to Notre Dame last week.

“The season is not over,” Wisconsin wide receiver Kendric Pryor said. “It’s just getting started. We’re one quarter of the way through. We’re not going to sit here and dwell on ‘Yeah, we lost two games but okay.’ We can’t go back and change it.”

As Harbaugh noted, this game should provide an indication of whether Michigan truly has turned a corner after going 2-4 last season. Michigan still hasn’t played away from home.

“We got hurt not setting the edge enough,” Harbaugh said of last year’s game. “A point of emphasis: stouter run defense and setting edges.”

This year, Michigan has the stronger rushing attack thus far.

Blake Corum leads the nation in all-purpose yards and spearheads an offense that has 290.8 yards rushing per game to rank fifth among all Football Bowl Subdivision teams. Wisconsin ran for just 78 yards on 28 carries against Notre Dame.

Wisconsin has the nation’s top-ranked run defense. The Badgers are allowing just 23 yards rushing per game and 1.01 yards per carry.

“We’ll do what we try to do every week — stop the run,” Wisconsin defensive end Matt Henningsen said. “They do a lot of different stuff. They run counter, they run zone, they run power, they run stretch. They run almost any run play you can think of. It’s difficult to prepare for a team that can run the ball like that.”

Michigan faced a stacked box in last week’s 20-13 win over Rutgers and went scoreless in the second half. Rutgers held the Wolverines to 122 yards rushing.

Wolverines quarterback Cade McNamara had a season-high 16 pass attempts and completed just nine. He missed some open receivers, including one in the end zone.

Wisconsin is a 1 1/2-point favorite, according to FanDuel Sportsbook. The Wolverines are 0-11 as an underdog with Harbaugh as their coach.

Wisconsin has gone just 5-7 over its last 12 games. The stretch started with Wisconsin losing the Big Ten championship game and Rose Bowl to end the 2019 season.

“I know we’ll turn this thing around,” Wisconsin offensive tackle Logan Bruss said. “We just need to keep working one day at a time.”

Wisconsin will honor former coach and athletic director Barry Alvarez on Saturday. Alvarez retired earlier this year as Wisconsin’s athletic director. He coached the Badgers from 1990-2005.