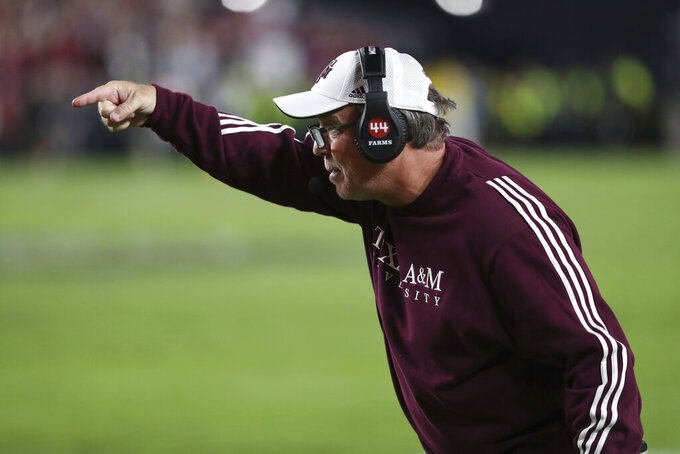 Texas A&M coach Jimbo Fisher gives instructions to the offense during the second half of an NCAA college football game against South Carolina on Saturday, Oct. 22, 2022, in Columbia, S.C. (AP Photo/Artie Walker Jr.)

COLLEGE STATION, Texas (AP) — No. 15 Ole Miss looks to rebound from its first loss of the season Saturday night when the Rebels visit a Texas A&M team reeling from yet another defeat in an increasingly disappointing season.

“It’s a new challenge for our guys and the biggest key is that one loss, you can’t let it move into more losses,” Ole Miss coach Lane Kiffin said. “We can’t let that beat us again.”

The Aggies entered the season ranked in the top-10 and hoping to contend for a national title. Instead, with just three wins after seven games they’ll have to win three of their last six games to qualify for a bowl game.

Though disappointed with the results, coach Jimbo Fisher believes his team has the right attitude to snap a three-game skid this week.

Tight end Max Wright agreed and said the Aggies are looking ahead to see how they can play better rather than lamenting their bad start.

Despite Texas A&M’s struggles, Kiffin knows that the Aggies have a stacked roster and will be a tough test for his team.

“No time to mope,” he said. “We’re getting ready to go play probably one of the top five rosters in America. I think they had eight five-star players a year ago, the most ever. These guys are ultra-talented and we’re going to go play in one of the top five hardest places to play. That’s a combination that makes you have to do a lot of things right in order to have a chance to win.”

The Rebels' third-ranked running game still has its biggest weapon, freshman Quinshon Judkins. But No. 2 rusher Zach Evans missed the LSU game with a leg injury and Ulysses Bentley IV is still limited after a wrist injury against Georgia Tech.

“The key to them, if you watch it, and it always has been, is running the ball,” Fisher said. “You have to do it with the tempo and get set and make sure guys are there. Because if they can get that run game going, then it becomes a two-headed monster that really goes on you.”

Evans’ status isn’t known for this game, but one runner Kiffin doesn’t plan to rely on — quarterback Jaxson Dart. He intends to limit Dart’s designed runs. Ole Miss ran for a season-low 116 yards against LSU.

Texas A&M quarterback Haynes King left last week’s game in the fourth quarter with a shoulder injury and didn’t return. But Fisher said he was OK this week and that he should play against Ole Miss.

The news was much worse when it comes to the team’s offensive line. The Aggies will be scrambling to find players to fill in after starting offensive linemen Bryce Foster and Akinola Ogunbiyi, along with reserve Jordan Moko all sustained season-ending injuries last week.

The Ole Miss defense has been pummeled the past two games for 553 yards rushing and eight touchdowns on the ground. It hasn’t helped that top defenders Troy Brown and Cedric Johnson have been out or limited by injuries.

The Rebels coaches showed the defenders film from early games to showcase the energy level and gang tackling. Kiffin sees a similar inconsistency and potential for the Aggies defense.

“At times they’ve played great defense throughout the year,” he said.

The Aggies will play at home Saturday for the first time in six weeks, which is their longest time away from home since 1979.

That season Texas A&M played its first five games on the road while Kyle Field was under construction to add the third seating decks. They made their home debut that season on Oct. 13, 1979 against Houston.

This year the Aggies played their first three games at home capped by a 17-9 win over Miami Sept. 17. They faced Arkansas in Arlington, Texas after that before consecutive road games at Mississippi State and Alabama. Their bye week came next followed by last week’s trip to South Carolina.