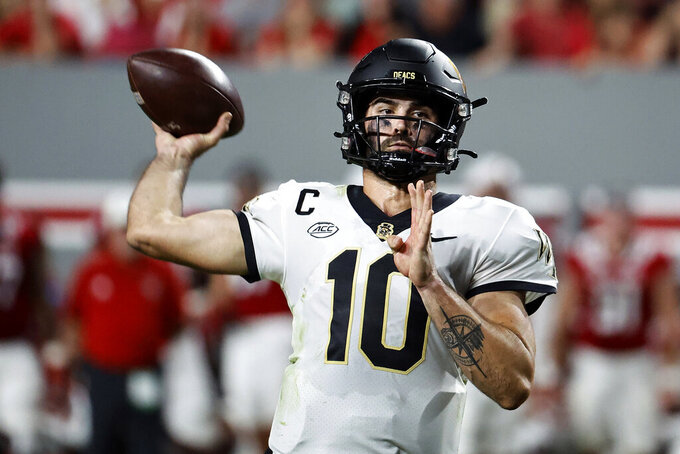 WINSTON-SALEM, N.C. (AP) — North Carolina has finally figured out how to win on the road. That has the 15th-ranked Tar Heels a win away from clinching a trip to the Atlantic Coast Conference championship game.

UNC visits Wake Forest on Saturday night in the renewal of a long-running series that has included wild comebacks and video-game scores the past two seasons. This time, the Tar Heels (8-1, 5-0 ACC) arrive with a 5-0 record in road games after going 0-5 last year and can clinch the league's Coastal Division title.

The Tar Heels won at Appalachian State and Georgia State, followed by league wins at Miami, Duke and Virginia.

The Demon Deacons (6-3, 2-3) were ranked in the top 10 of the AP Top 25 two weeks ago before losses at Louisville and No. 17 North Carolina State knocked them out of the poll, ending a run of 22 straight weeks.

It isn't hard to figure out why: the team that has found sustained success through avoiding self-inflicted mistakes like penalties and turnovers has lost 11 turnovers in the past two games.

“When we follow our process and we follow our plan to win, usually we win games,” coach Dave Clawson said. "And the result of that is that we become a nationally ranked team. .... We've turned it over 11 times in two weeks. And so we're not ranked right now because we're turning the football over.

“If we want to get ranked again, we'd better stop turning the football over."

This is a marquee matchup of quarterbacks with UNC's Drake Maye and Wake Forest's Sam Hartman.

“Probably why (ESPN2) picked this one out,” Clawson said.

Maye is a second-year passer who leads the Bowl Subdivision ranks with 31 touchdown throws. He's also third by throwing for 329.3 yards per game, and has thrown just three interceptions in 312 attempts — a rate of 1%.

Hartman, a fifth-year veteran, is tied for ninth in FBS with 24 touchdown passes and rankes 13th by averaging 302.9 yards passing. His 96 career TD passes trail only Clemson's Tajh Boyd (107) on the ACC's career list.

Hartman has thrown for 827 yards and nine touchdowns with two interceptions in the last two games against UNC to go with three rushing touchdowns.

It's hard to state just how wild the last two meetings have been, both won by UNC at home by similar scores.

Then last year, the Demon Deacons brought a No. 10 ranking and unbeaten record into Chapel Hill, then built an 18-point third-quarter lead (45-27). The Tar Heels rallied again, this time behind a big rushing game from Ty Chandler on the way to a 58-55 win.

Wake Forest is 19-3 at home since 2019, with the only losses coming to Louisville in 2019 and twice to Clemson. The latter includes this year's double-overtime thriller, won by the Tigers 51-45 despite Hartman's six touchdown passes.

The Tar Heels have ranked among worst defenses in FBS, though they have been better in scoring defense (24.2 points allowed per game) in ACC play. The question is whether that unit can get any pressure on Hartman up front.

That was a key factor in the Demon Deacons' past two losses, with Louisville tallying eight sacks and N.C. State adding four more. Wake Forest scored 21 points in each game after scoring 31+ in their first seven.

UNC’s 5-0 start in league play is its best since going 8-0 in the regular season in 2015, which marked the only time the Tar Heels have reached the ACC championship game.