No. 16 Virginia beats No. 19 Illinois to cap emotional week 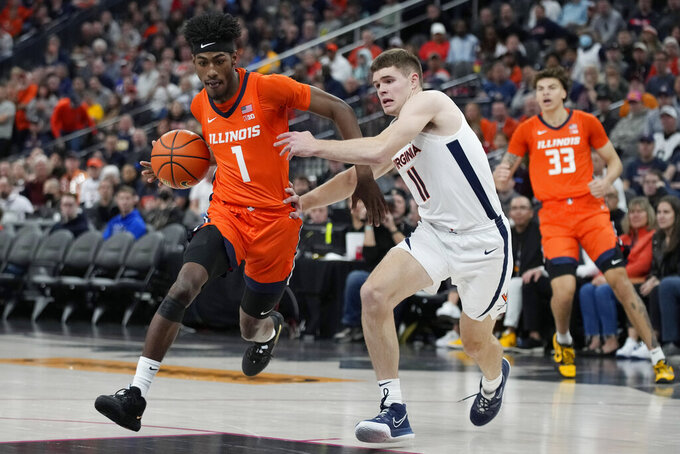 LAS VEGAS (AP) — Reece Beekman and No. 16 Virginia capped an emotional week by going on a late 13-point run to defeat No. 19 Illinois 70-61 on Sunday to win the Continental Tire Main Event.

Beekman scored 17 points and was the tournament MVP. Kihei Clark and Jayden Gardner each had 12 for Virginia.

Jayden Epps had 14 points and Coleman Hawkins 10 for the Illini.

The game was played exactly a week after Virginia football players Lavel Davis Jr., Devin Chandler and D’Sean Perry were fatally shot after a field trip to see a play in Washington. Two others were wounded.

Virginia players wore shirts to honor those killed and locked arms in tribute before the game.

The team canceled its game Monday against Northern Iowa, but chose to play in Las Vegas. Forward Kadin Shedrick said Friday that being in Las Vegas was therapeutic.

The game was close throughout, with neither team pulling away until Virginia's late run.

Both teams' top scorers from Friday's games also were largely held in check.

Virginia's Armaan Franklin, who scored 26 points against Baylor, had just nine against Illinois. Illini guard Terrence Shannon Jr. also scored nine points after getting 29 against UCLA in going 8 of 9 from 3-point range. Shannon made just 1 of 5 on Sunday.

Virginia became the first team from the Atlantic Coast Conference to win this tournament, which is in its ninth year. The Pac-12 Conference won three of the previous four tournaments — Arizona State in 2018, Colorado in 2019 and Arizona last year. Baylor of the Big 12 Conference in 2020 was the only team from another conference during that stretch, and the Bears' hopes to become the first two-time winner ended in Friday's 86-79 loss to Virginia.

Both teams take a noticeable step down in competition levels on Friday, with Illinois hosting Lindenwood of the Ohio Valley Conference and Virginia returning home to play Maryland-Eastern Shore of the Mid-Eastern Athletic Conference.