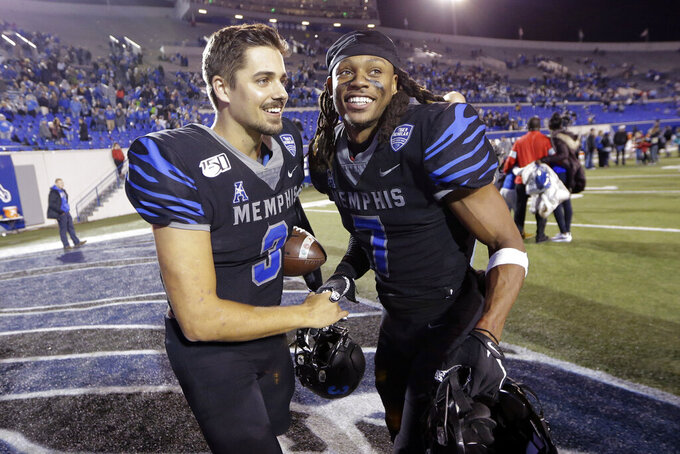 MEMPHIS, Tenn. (AP) — The Memphis Tigers marked off their first 11-win season along with the 500th victory in program history all in the same game.

Now those are almost afterthoughts with the Tigers’ sights set on much, much more.

Brady White threw for 233 yards and two touchdowns as No. 17 Memphis beat 18th-ranked Cincinnati 34-24 Friday for the Tigers’ third straight American Athletic Conference West title and the right to host the league championship — and the Bearcats again — next week.

This will be the first time that Memphis (11-1, 7-1, No. 18 CFP) will host a conference title game. And the Tigers will do it with a chance at playing in the Cotton Bowl still possible for a program that doesn’t have many trophies around.

“We do want to celebrate it,” Memphis coach Mike Norvell said of that third straight division title. “But we’re not done.”

Memphis set up the rematch by snapping the East Division champ’s nine-game winning streak. Cincinnati (10-2, 7-1, No. 19 CFP) hadn’t lost since being routed by Ohio State on Sept. 7, and having to return to the Liberty Bowl to play Memphis in consecutive weeks wasn’t something coach Luke Fickell thought about knowing that would mean a Bearcats’ loss.

Joseph Dorceus and Bryce Huff had two sacks apiece, and Memphis finished with five. The Tigers came up with three turnovers, including an interception by Sanchez Blake Jr. with 1:35 left.

Memphis also forced Cincinnati three-and-out after Ahmad Gardner intercepted White with 7:49 left with the Tigers up only 27-24.

The Tigers led only 20-17 when they put together their longest drive, going 83 yards over nine plays capped by a flea flicker. Patrick Taylor took the handoff, handed to Kedarian Jones who flipped the ball to White, and he hit Damonte Coxie for a 46-yard TD with 13:22 left on a play that Memphis put in a couple weeks ago.

“I put it out there for my guy, he made a good play and really good to see us execute something we’ve been practicing for two weeks,” White said.

Antonio Gibson scored on a 29-yard TD run with 3:16 left for the final margin for Memphis. White also threw a 9-yard TD pass to Jones in the first quarter.

Cincinnati started redshirt freshman Ben Bryant for the first time, snapping a 24-game streak of starts for Desmond Ridder whose ailing shoulder limited him to 140 yards passing combined over his past two games. Bryant had nearly that by halftime and finished with 229 for Cincinnati’s fourth-highest passing game this season.

“He did a great job,” Fickell said of Bryant. “No one wants turnovers. Again, we had obviously a few too many of those. He had poise, he had confidence. He didn’t’ seem rattled at any time in the game.”

Bryant threw a 4-yard TD pass to Leonard Taylor helping Cincinnati put together back-to-back TD drives in the second quarter to tie it up at 17 just before halftime. Michael Warren II followed with a 3-yard TD run. Bryant also ran for a 12-yard TD with 10:27 left as Cincinnati pulled within 27-24.

Cincinnati: The Bearcats came in leading the AAC in scoring defense, allowing just 19.9 points a game. They held the nation’s eighth-best scoring offense below its average of 42.2 points a game, and Memphis didn’t match its average of 488.2 yards a game. Even with the offensive boost Bryant provided, it wasn’t enough.

Fickell said they will need to know Ridder’s status by Tuesday or Wednesday before making a decision on who starts the title game.

Memphis: The Tigers already came in leading the nation in special teams efficiency and had the most kickoffs returned for TDs in the past four years with 10. Chris Claybrooks became the fifth different player to score at least once on a kickoff return, taking the opening kickoff 94 yards for a TD.

“That trophy will always stay in Memphis. We’ll always be able to walk around talking about the three-peat of the West Division. But we want to continue to finish the journey, and we want to make sure these guys are going out, playing to the best of their abilities and accomplishing all that I believe that they can,” Norvell said.

Memphis will host Cincinnati on Dec. 7 in a rematch for the American title.