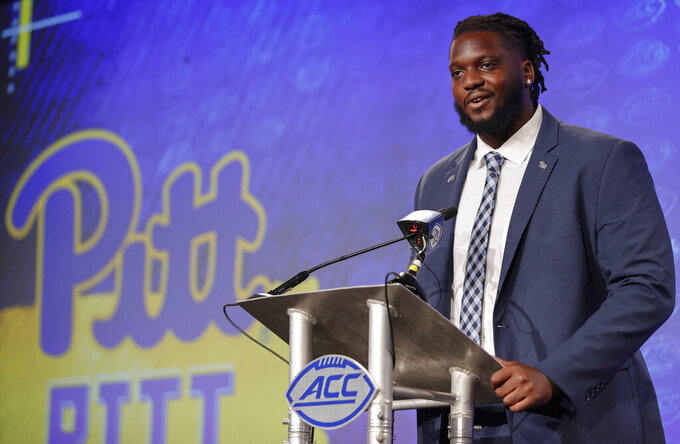 PITTSBURGH (AP) — Kenny Pickett is next door, flinging footballs for the Pittsburgh Steelers. Jordan Addison is in Southern California, lured away by the chance to play in a bigger market with all the bells and whistles (and endorsement opportunities, apparently) that come with it.

The Pittsburgh teammates they left behind insist they are cheering for both, and eager to prove last year's breakout season — when Pickett mounted an unlikely Heisman Trophy campaign, Addison won the Biletnikoff Award as the nation's top receiver and the Panthers roared to their first ACC title — is no fluke.

“That's something we've been harping on all offseason, showing we're not just a one-hit (wonder),” said Deslin Alexandre, a senior defensive end for the 17th-ranked Panthers. “Like every little thing we're doing is to make sure we continue to win and do the things we did last year even better, accomplish more goals."

Namely, reach the College Football Playoff. No, they're not kidding.

Even if they’ll do it a little bit differently. At least on offense.

USC transfer Kedon Slovis and holdover Nick Patti are fighting for the right to replace Pickett. Offensive coordinator Frank Cignetti left Boston College to return home for a third stint with the Panthers after starting his career as a graduate assistant at Pitt in 1989.

Cignetti inherits an offensive line that is returning all five starters and plenty of depth at both running back and wide receiver. The Panthers understand they lost plenty of star power over the winter and spring. They believe that doesn't necessarily mean they've lost firepower.

“Both of those guys (Slovis and Patti) can sling the rock,” wide receiver Jared Wayne said. “Whoever is back there, our job stays the same: to get open and catch the ball and make their job easier.”

Slovis was spectacular as a freshman at USC in 2019 but saw his numbers dip in each of the last two seasons. He didn't anticipate ending up at Pitt when he entered the transfer portal but hasn't wasted time getting up to speed. He estimated he's made some 10,000 throws to his new teammates since arriving on campus. He's well aware Pickett finished third in the Heisman race last year. It's a lot to live up to. He's hardly running away from the challenge.

It might merely take a good offense for the Panthers to compete for another Coastal Division title.

A defense that finished second in the FBS in sacks a year ago returns defensive end Habakkuk Baldonado, defensive tackle Calijah Kancey and middle linebacker SirVocea Dennis, who made arguably the most important play of the year last season with an interception return for a touchdown that sparked an upset of ACC power Clemson.

Defensive coordinator Randy Bates believes his job is to put together the most aggressive unit in the country. That mindset can lead to a lot of risk/reward propositions, propositions the Panthers have won far more than they've lost of late. Bates believes that trend can continue even with an exodus of players to the NFL.

Pitt opens the season by renewing The Backyard Brawl with longtime rival West Virginia. The series went on a decade-long hiatus after both schools left the now-defunct Big East.

That means most of the players were in middle or elementary school the last time the Panthers faced the Mountaineers in 2011. That doesn’t mean there won't be any animosity on the Acisure Stadium turf on Sept. 1.

“Once we put on our jerseys and have that ‘Pitt’ script on our helmets, whoever they say we don’t like, we don’t like,” Dennis said.

The rest of the schedule includes a non-conference visit by Tennessee on Sept. 10 and a trip to Miami in the regular-season finale on Nov. 26 that could determine who plays in the ACC championship. The Hurricanes handed Pitt its lone conference loss a year ago.