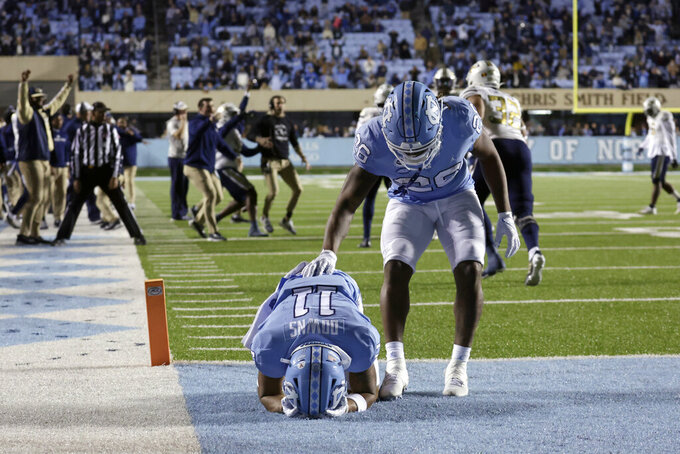 North Carolina wide receiver Josh Downs (11) is consoled by running back D.J. Jones (26) as he reacts to not catching a pass that would have put the team in the lead during the second half of an NCAA college football game, Saturday, Nov. 19, 2022, in Chapel Hill, N.C. Georgia Tech players and coaches celebrate in the background. (AP Photo/Chris Seward)

The 18th-ranked Tar Heels get another shot, this time coming off a loss and facing fierce rival North Carolina State.

Friday's game closes the regular-season schedule before UNC (9-2, 6-1 ACC) takes on No. 7 Clemson in the league championship game in Charlotte on Dec. 3. It marks another test for Mack Brown's team on keeping its focus with the title game in the distance — a test the Tar Heels didn't handle well in a surprising 21-17 home loss to four-win Georgia Tech.

It was the first true stumble of the season for star UNC quarterback Drake Maye and a high-scoring offense, and the defense couldn't get a final stop late to get the ball back for a chance to win.

“We've lived with our offense and some plays with our defense,” Brown said. “And to win on Friday, both are going to have to step up and play better.”

The Wolfpack (7-4, 3-4) have had a bumpy season, opening it with hopes of winning the program's first ACC championship since 1979 behind the preseason league player of the year in quarterback Devin Leary.

N.C. State pushed all the way to No. 10 in the AP Top 25 before a loss at Clemson, then Leary went down with a season-ending injury in October. Injuries have piled up since, including to talented rookie backup quarterback MJ Morris — who seemed to take hold of the job after Leary got hurt.

The Wolfpack lost at home to Boston College, then played without Morris as well as starting center Grant Gibson in last week's loss at Louisville. Reserve Ben Finley got the bulk of the work, though coach Dave Doeren isn't discussing his QB plans for Friday — or the team's injuries.

“I’m looking forward to competing with them," Doeren said. “It’s a group that doesn’t like each other. You know my feelings on it. And even though this season has taken a different path for us with our injuries, I can’t say enough about the spirit of this team and this staff.”

Finley, the younger brother of former Wolfpack QB Ryan Finley, completed 16 of 35 passes for 201 yards and a touchdown with an interception against the Cardinals.

But the Wolfpack managed just 10 points against a Louisville defense known for its ability to pile up sacks.

“There’s things he didn’t do well but for a guy that was on the scout team until two weeks ago, I was impressed with just the way he handled himself,” Doeren said.

The Tar Heels' offense has been a machine for most of the season, but they went just 2-for-5 in the red zone during the 21-17 loss to Georgia Tech.

“We just had a multitude of things down there that affected us,” offensive coordinator Phil Longo said.

Maye is third in the Bowl Subdivision ranks with 34 touchdown passes, though he didn't throw for a score against Georgia Tech. He has thrown four interceptions on 391 pass attempts, a rate of 1%.

UNC's Josh Downs has been one of the nation's top receivers, even with missing time due to injury. Downs is seventh in FBS in receiving yards per game (97.6) and tied for third in TD catches (11) despite playing two fewer games than the rest of that top tier.

Before the 2019 season, North Carolina won the first two meetings since Brown's return for a second stint with the program. But the Wolfpack won last year's meeting with an improbable comeback that will live on in rivalry lore, erasing a 30-21 in the final two minutes and winning 34-30 after two touchdowns in a 26-second span.