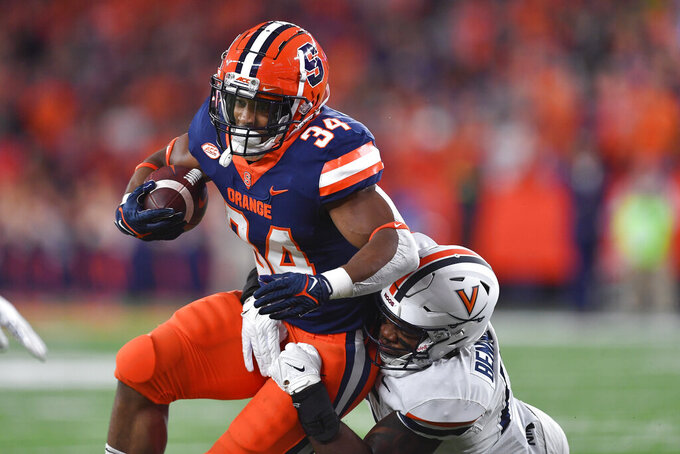 SYRACUSE, N.Y. (AP) — Syracuse is in rarefied air, unbeaten after five games for the first time in 35 years and ranked No. 18 as its season reaches the midpoint. The players say that's what they expected — and they don't want it to end.

“We want to keep winning,” quarterback Garrett Shrader said. “The rankings and all that stuff doesn’t necessarily matter. If we take care of business, the scoreboard should be in our favor at the end of the game.”

Both teams are in the hunt for the Atlantic Division title and the Wolfpack, who have already lost to division leader No. 4 Clemson, can’t afford another setback.

“It’s going to be a great challenge for us offensively,” North Carolina State coach Dave Doeren said. “And I know it’ll be loud.”

Indeed, it will; more than 45,000 tickets have been sold for the first game in Syracuse featuring two top-20 teams since 1998.

N.C. State is coming off a gritty comeback win against Florida State, a victory secured by the Wolfpack’s veteran defense after halftime and the reliable leg of kicker Christopher Dunn. But offense was a struggle, and that was even before quarterback and preseason ACC player of the year Devin Leary went down with a shoulder injury in the third quarter.

Doeren said the quarterback won’t need surgery but left open the possibility of a multi-week absence. If Leary can’t play, Charleston Southern graduate transfer Jack Chambers would take over the offense. Chambers attempted only one pass last week in relief of Leary with the Wolfpack leaning on the ground game to move the ball.

“If we’re going to have to get in a game and chuck it around, we feel great about him,” Doeren said. “I thought Jack did an amazing job just being poised more than anything."

Leary, Chambers, and freshman M.J. Morris are listed in that order at quarterback on the depth chart.

“The backup is on scholarship, too. The approach doesn’t change,” Syracuse defensive lineman Caleb Okechukwu said. "We’re going to stay focused and do what we have to do.”

N.C. State ran for 182 yards against FSU, its highest output in any game against a Bowl Subdivision opponent. The Wolfpack had managed just 34 yards rushing in the Clemson loss but showed a willingness to grind out drives with Jordan Houston while fellow running back Demie Sumo-Karngbaye exited early with an injury.

“It does build confidence moving forward that you can run the ball like that,” Doeren said.

Syracuse and N.C. State have the top two defenses statistically in the ACC. The Orange lead in total defense, allowing 271.6 yards and 14 points per game. That's just ahead of the Wolfpack's 297.8 yards allowed and 15.7 points per game allowed. Syracuse also ranks second against the run (95).

In 14 starts for the Orange, Shrader has engineered five game-winning or game-tying drives that have resulted in points in the final 90 seconds of regulation.

Syracuse is tied for ninth nationally in red-zone offense, failing to score only once out of 24 tries and that was by choice at the end of a 59-0 victory over FCS foe Wagner. N.C. State has converted 19 of 22 times, and both teams owe much of that success to their place-kickers. Andre Szmyt has kicked eight field goals to complete red zone drives and N.C. State's Dunn has made six. Szmyt is 10 for 11 overall this season, and Dunn is 12 of 13.

“It's a luxury to have somebody like that," Doeren said. “We've all seen what happens when you don't — one-possession games you don't win. It makes you a complete team when you have the ability to make field goals when you don't get touchdowns and not have to go for it all the time on fourth down because you don't like your odds.”

Last season, N.C. State scored 28 points in the second quarter and beat Syracuse 41-17 at Carter-Finley Stadium. Leary was 17-for-24 passing for 303 yards and two touchdowns.

“We definitely want to get back at these guys from last year," Shrader said. “We felt like we were a much better team (than we showed). We just didn’t perform that well.”