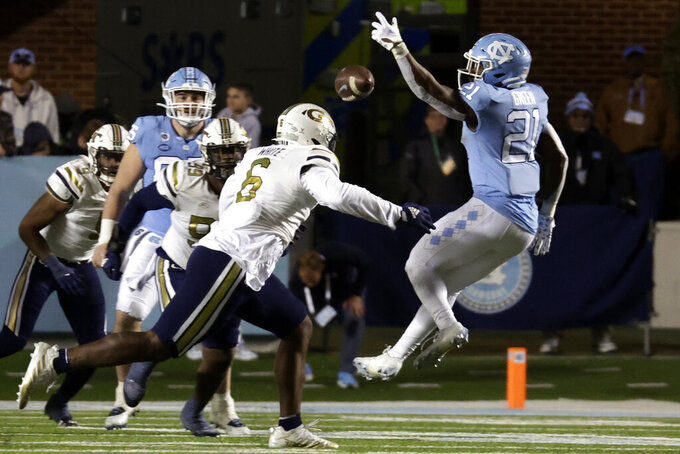 The Tar Heels already clinched the league's Coastal Division title and a trip to the ACC championship game to face No. 7 Clemson. The Wolfpack already knows another bowl game is ahead. So there's little in the standings to gain. Then again, this is a longtime rivalry between programs separated by roughly 30-minute drive along Interstate 40.

UNC's offense against N.C. State's defense. The Tar Heels have been one of the nation's best offenses all season behind star quarterback Drake Maye. Maye is third in the Bowl Subdivision ranks with 34 touchdown passes with just four interceptions. N.C. State has leaned on a veteran-led defense all season to pressure quarterbacks and make every yard tough, most notably in the win against Wake Forest and its prolific quarterback in Sam Hartman.

N.C. State: RB Michael Allen. For an offense battling injuries, the freshman runner could provide a spark. He's taken on a larger role in a tandem with Jordan Houston in the backfield, running for 77 yards in a loss to Boston College while having a TD catch in the Louisville loss.

UNC: WR Josh Downs. Downs is seventh in the Bowl Subdivision ranks in receiving yards per game (97.6) and tied for third in TD catches (11) despite playing two fewer games than the rest of that top tier.

N.C. State won last year's meeting in a comeback certain to live on in the rivalry's lore. The Wolfpack trailed 30-21 with about two minutes left before scoring two touchdowns in a span of 26 seconds to win 34-30. ... UNC had won the first two meetings since Mack Brown returned for a second stint with the program before the 2019 season. ... The Tar Heels went just 2-for-5 in the red zone last week against Georgia Tech. ... N.C. State kicker Christopher Dunn has made all 21 field goals and all 27 extra points he's attempted this season. ... Both of UNC's losses this season have come at home.