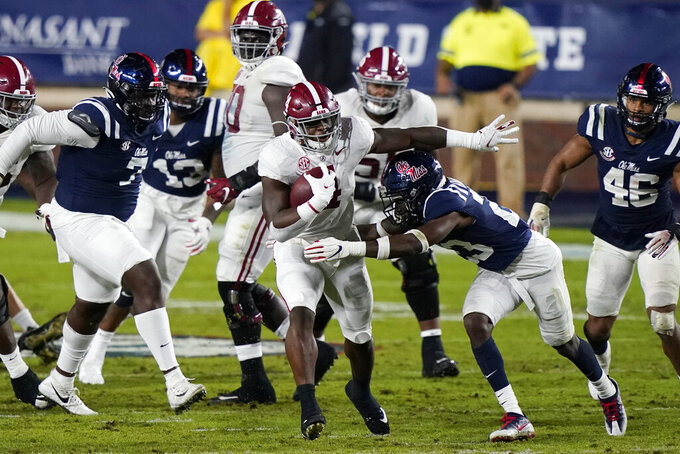 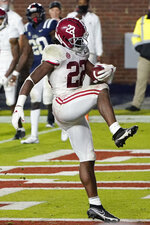 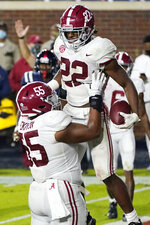 OXFORD, Miss. (AP) — Lane Kiffin's Mississippi offense put up more yards against an Alabama defense than has ever been done before and scored more points against the Crimson Tide than any unranked team has ever.

It was not enough.

Najee Harris ran for 206 yards and five touchdowns and No. 2 Alabama beat Ole Miss 63-48 on Saturday night in the highest-scoring Southeastern Conference regulation game ever.

"We knew we had to score pretty much every possession," Tide quarterback Mac Jones said.

Alabama and Ole Miss traded touchdowns for much of the night, but with the Tide (3-0) leading 49-42 the Rebels misfired in Alabama territory and had to settle for a field goal. That was as good as a stop in this game. Tide receiver DeVonta Smith went 14 yards for a touchdown run to make it 56-45 with 3:16 left.

"To beat that team, we’ve got to play perfect,” said Kiffin, the former Alabama offensive coordinator. “We didn’t do that. Obviously, we didn’t play well on defense.”

After another Ole Miss field goal, Alabama recovered an onside kick and Harris busted a 39-yard touchdown run moments later to seal it.

“We scored every time we had to score,” Tide coach Nick Saban said. “We took the air out of it at the end of the game.”

Kiffin worked for Saban at Alabama from 2014-16 and became the latest former Saban assistant to come up short against the old boss.

Saban improved to 21-0 against his former assistants, but he did suggest Kiffin and his staff might have been able to decipher the Tide's defensive signals.

Kiffin's offense made the Tide work hard. The Rebels got nearly 250 yards rushing and four touchdowns from Snoop Conner (128 yards) and Jerrion Ealy (120).

“We’ve never played this way on defense,” Saban said. “It’s certainly not what we try to aspire to be as a defensive team. I believe in our players. We have to get our players to play better. I think we’re capable of it.”

Alabama: The results weren’t unexpected but the degree of difficulty was surprising, especially for the Crimson Tide defense. Bottom line was Alabama avoided a road upset at the hands of an inspired underdog.

Ole Miss: The offensive unit is impressive. The special teams are adequate. But the Rebels are going to have to get more from a defense that plays hard but is clearly short handed in talent and depth by SEC standards. Competitive home losses to Florida and Alabama have built some optimism.

The Tide's trips to Oxford have been eventful in recent years. The Rebels upset the Tide in 2014 and Alabama needed a big comeback to 48-43 win at Mississippi in 2016.

“All in all, we’ve had some crazy games over here,” Saban said. “This was another one.

The Tide has won five straight against Ole Miss since losing two in a row in 2014 and '15, scoring at least 48 points in each game and reaching the 60-mark three times.

Despite the win, Alabama isn’t likely to leap frog Clemson into the No. 1 slot.

Alabama: The Crimson Tide hosts No. 3 Georgia Saturday night in what should be college football’s showcase match up of the weekend.