No. 2 Bama aims to clinch SEC title shot vs No. 21 Arkansas 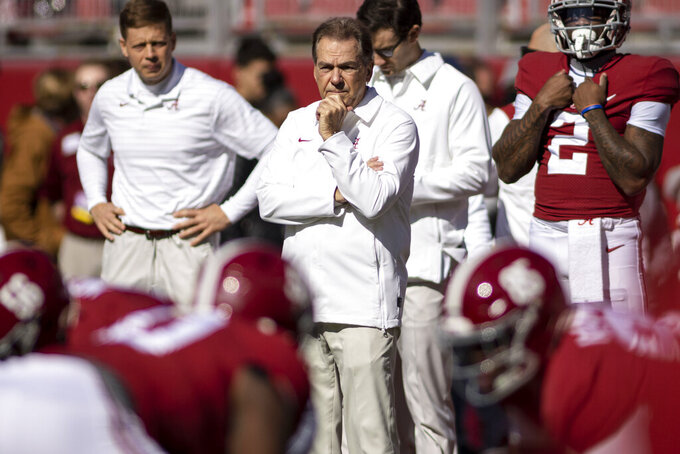 Perhaps the big change has come in the 21st-ranked Razorbacks and their belief that they can beat the No. 2 Crimson Tide heading into Saturday’s game at Bryant-Denny Stadium.

“I know it might be considered coachspeak or whatever, but the No. 1 thing you have to do to go beat a team is believe you can do it,” Pittman said. “If you’ve got a whole plane full of guys that are going, ‘Man, when’s this game over?’ You don’t have a chance.”

It has been a decidedly one-sided game since coach Nick Saban arrived in Tuscaloosa.

Alabama (9-1, 5-1 Southeastern Conference) has won 14 straight, many of them blowouts, against the Razorbacks (7-3, 3-3). The Tide can clinch a share of the SEC West title and a spot in the league championship game with a victory.

'Bama has outscored Arkansas 252-80 over the past five meetings, including 52-3 last season. This Razorbacks, however, are riding a three-game winning streak, the past two by a field goal apiece.

“They’re probably improved as much from last year to this year as anybody in the country," Saban said. “They’ve had some great wins over some very good SEC teams. And they’ve got really good players. They play well together. They play winning football.”

He said the Razorbacks play with toughness and effort and "hit you in the mouth every chance they get.”

Alabama will be down to two healthy scholarship tailbacks for the game with Roydell Williams' right knee injury.

Alabama linebacker Will Anderson Jr. is in pursuit of more than just quarterbacks. He’s also chasing one of college football’s great pass rushers, former Tide star Derrick Thomas. Anderson leads the nation in sacks and tackles for loss. He has 19.5 sacks in 22 career games, or .89 per game. Thomas finished with 52 sacks in 49 games, or 1.06 per.

They’re far and away above any other Tide players in that regard.

“Will Anderson is as good a player as anybody has on their team, and he’s going to be a major concern for us,” Pittman said. “One thing you try to do is not let a difference maker make a difference and in his case it’s very, very difficult.

“It’s been fun to watch how different teams have tried to approach that problem, none of them having too much success.”

The game features some of the SEC’s top linebackers, with Anderson and teammates Christian Harris and Henry To’oTo’o. Arkansas is also loaded at the position with Bumper Pool, Grant Morgan and Hayden Henry.

Pool leads the Razorbacks with 100 tackles and 7.5 stops for loss.

HIGH PERCENTAGE Alabama quarterback Bryce Young set Alabama records for most consecutive completions to start a game (13) and highest completion percentage (91.3) against New Mexico State. But he has been surpassed as the Heisman Trophy favorite, according to FanDuel Sportsbook. Ohio State quarterback CJ Stroud is now a +150 favorite followed by Young (+200).

Alabama center Darrion Dalcourt and guard Javion Cohen, who missed the New Mexico State game with injuries, are expected to return. Saban said both have been practicing all week.