No. 2 Georgia pumped for big crowd in home opener vs UAB 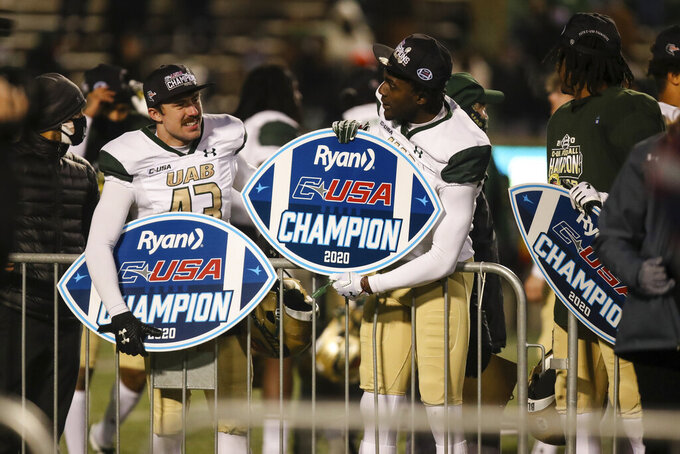 FILE - In this Dec. 18, 2020, file photo, UAB players celebrate after defeating Marshall in the Conference USA Football Championship at Joan C. Edwards Stadium in Huntington, W.Va. UAB will go after its third Conference USA championship in the past four seasons. (Sholten Singer/The Herald-Dispatch via AP, File) 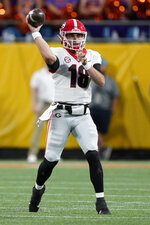 ATHENS, Ga. (AP) — Despite a surge in COVID-19 cases and an outbreak within its own program, No. 2 Georgia is thrilled to be playing between the hedges before more than 90,000 red-clad fans.

“It’ll be the first time we have a home atmosphere like we expect,” coach Kirby Smart said.

Well, at least since the world became engulfed in a pandemic that has claimed more than 600,000 American lives.

Last season, Georgia limited crowds to around 20,000 at sprawling Sanford Stadium. But school officials are returning to business as usual this season, not even requiring masks, vaccinations or negative COVID-19 tests to attend games.

Coming off a huge win over Clemson in the season opener, Georgia's hopes for a bit of normalcy were rocked by Smart's revelations that five players and staff members had tested positive for the virus — even though the Bulldogs have one of the highest vaccination rates in the Southeastern Conference.

No one has been identified other than Ron Courson, the athletic department's longtime medical director. He was unable to attend the opening game after testing positive.

Smart downplayed the situation later in the week, saying his comments were “blown way, way out of proportion.”

UAB coach Bill Clark shrugged off the COVID-19 news coming out of Athens, saying it would have no impact on his team's preparation.

“From a game standpoint, it really doesn’t mean a lot to us,” he said. “We do not know who that is. It could be non-starters. We will not know that until game time. It is kind of like an injury situation — unless you know a guy is out, it does not affect what we do.”

Georgia, which moved up three spots in The Associated Press rankings and now trails only defending national champion Alabama, hasn't lost to a non-Power Five school since 2011.

“You know, everybody’s been talking about Clemson the past week, but we’ve been focused on UAB," Georgia offensive lineman Warren McClendon said. “They have a good team.”

Some things to watch for Saturday when the Bulldogs host UAB:

Even with only four returning starters, Georgia's defense looks like it might be the best in the nation.

The Bulldogs totally shut down Clemson in a 10-3 victory, limiting the Tigers to 180 yards and coming away with seven sacks. Georgia's D even scored the game's only TD on Christopher Smith's 74-yard interception return.

On the flip side, Georgia's offense failed to reach the end zone against Clemson, putting some heat on JT Daniels & Co. to have a bounce-back performance against the Blazers.

Daniels improved to 5-0 as the Bulldogs' starting quarterback but averaged only 4.5 yards per completion to go along with an interception.

The Blazers opened the season with a 31-0 win over Jacksonville State.

Tyler Johnston III threw for 320 yards and two touchdowns, Trea Shropshire had 120 yards receiving and a score, and the Blazers defense limited the FCS powerhouse to just 156 total yards.

It was the fifth time Johnston has passed for 300 yards in his career. He's now tied for third on the school's career list with 37 TD passes, and fourth in passing yards with 4,748.

STEP UP IN COMPETITION

Georgia is tied for the highest-ranked opponent that UAB has ever faced.

The only other time the Blazers took on the nation's No. 2 team was in 1998 at Tennessee. They lost 37-13 to the Vols, who went on to claim the national championship.

UAB has never beaten a top 10 team, including two previous meetings against Georgia.

The Blazers nearly pulled off a shocking upset in Athens in 2003, losing 16-13 to Georgia team ranked fourth. When the teams met again three years later, Georgia was No. 10 and romped to a 34-0 victory.

Georgia punter Jake Camarda, the SEC's special teams player of the year in 2020, is off to another strong start.

He had five punts for a net average of 43.4 yards against Clemson. He kept the Tigers backed up by dropping four punts inside the 20-yard line.

UAB is playing its first four games on the road before an Oct. 2 home opener against Liberty that will mark the opening of the team's new downtown stadium.

Protective Stadium, a 47,100-seat facility, will replace ancient Legion Field and is expected to be a huge boost to a program that has already had plenty of success since re-launching its football team in 2017.