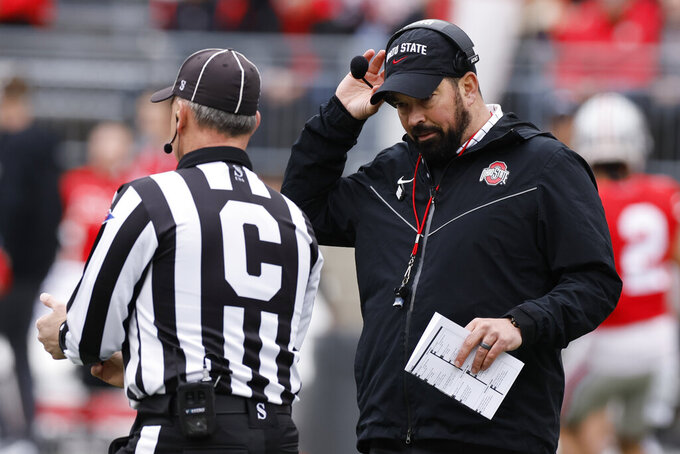 COLUMBUS, Ohio (AP) — Nine months later, the sting of losing to Michigan is still fresh for No. 2 Ohio State.

That's the way it is in Columbus. Don't lose to Michigan. Doing so brings a year of pain and misery.

“It was sickening,” receiver Jaxon Smith-Njigba said of the 42-27 thumping on Nov. 27 in Ann Arbor that ended an eight-game Buckeyes winning streak in the rivalry game.

Coach Ryan Day said it's been the source of motivation for everyone at the Woody Hayes Athletic Center.

Ohio State went on to win an exciting Rose Bowl shootout with Utah to finish 11-2, but the season will be remembered more for the failings, particularly a young, inconsistent defense considered to be largely responsible for the two losses. Oregon handed the Buckeyes their first regular-season loss in nearly three years in Week 2.

Day acted quickly after the season to make changes, firing every defensive coach except one and bringing in Oklahoma State defensive coordinator Jim Knowles to overhaul the unit.

Ohio State's flashy offense should score enough points to give the defense some breathing room.

Pressure to win? Comes with the territory, Day said.

“I think the thing that’s unique about Ohio State is, every year, we’re expected to win the whole thing. And that’s part of the deal here,” he said. “A lot of times you go 11-2 and win the Rose Bowl, and you say it’s one heck of a season. Well, not around here.”

Last year at this time, Stroud had yet to throw a pass in a college football game. Nor had Henderson gotten his first carry. Smith-Njigba was coming off a freshman season in which he caught just 10 passes for 49 yards.

Stroud, who battled the now departed Jack Miller for the starting job last summer, took a couple games to find his footing before assuming his role as the next Ohio State superstar quarterback, passing for 4,435 yards and 44 touchdowns. Oh yeah, and he was a Heisman Trophy finalist, too.

All that should come with an asterisk, he said.

“It feels like I haven’t really won anything, and honestly, we’re looking to change that," he said. “That’s not the standard that was put there before us. And, you know, we feel like we came up short. We got a lot of competitors on our team that love to play and want to be legends and have our name in the building forever.”

A finalist for the Broyles Award, which goes to college football’s top assistant coach, Knowles directed an Oklahoma State defense ranked third in the nation last season. He is charged with revitalizing a Buckeyes unit that tied for 59th while surrendering an average of 372.9 yards per game.

Knowles' defenses are known for aggression and multiple formations.

“He wants us to play fast and physical and not have too much on our brain,” said fourth-year safety Ronnie Hickman, one of the leaders of a defense that returns seven starters. “And he knows that we’re athletes, and he knows the best way for us to play fast is by not thinking so much."

The opener will be a nationally televised night game in Columbus against No. 5 Notre Dame on Sept. 3.

“It amplifies the preseason for sure," Day said. “You have to play your best football right then and there. You know, you can’t take a game or two to find your footing. So that game is going to be amped up. It’s going to be kind of a frenzy.”

The Buckeyes play five straight games at home to start the season. They'll host Michigan in this year's version of “The Game."