No. 20 Cincinnati aims to extend AAC winning streak at UCF 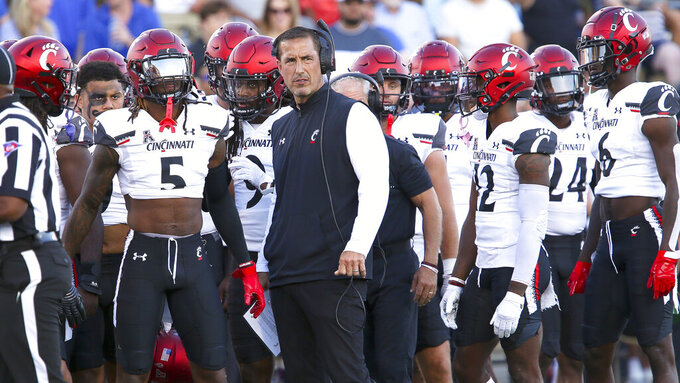 ORLANDO, Fla. (AP) — Luke Fickell has developed a deep appreciation for No. 20 Cincinnati’s will to win.

The two-time defending American Athletic Conference champions have won six straight games following a season-opening loss to Arkansas, getting the job done in a variety of ways to claw their way back into the Top 25.

The Bearcats (6-1, 3-0) held off SMU in the closing minutes for a sloppy 29-27 victory last week, matching the AAC record for consecutive regular-season victories over conference opponents. Tack on wins in the past two league championship games, and Fickell’s team has won 19 in a row against AAC teams.

“Finding ways to win is a little bit of what (we) look like right now,” Fickell said of his team.

Cincinnati's next test is on the road at UCF, which has combined with Cincinnati to win four of the past five AAC titles.

The Knights (5-2, 2-1) also won 19 straight against conference foes over the span of two-plus seasons before Cincinnati snapped the streak at home in 2019.

UCF, coming off a 34-13 loss at East Carolina, is 6-0 in conference home games under Gus Malzahn, the former Auburn coach who’s in his second season with the Knights.

Fickell often refers to what he calls “self-inflicted issues” that affect Cincinnati's performance from week to week.

The Bearcats struggled offensively at SMU, needing a program-record five field goals from Ryan Coe and to deny the Mustangs a potentially game-tying two-point conversion in the closing minutes. SMU had rallied after falling behind 17-0 — and Cincinnati hurt themselves with a season-high 14 penalties for 127 yards and yielding 13 fourth-quarter points.

UCF understands the challenge it faces this week.

“They have a winning culture. It’s impressive to watch,” Malzahn said. “This is one of the best teams in college football.”

The Bearcats have won three straight in the series, including 56-21 at Cincinnati last season and 36-33 in Orlando two years ago.

The Knights won back-to-back AAC crowns in 2017 and 2018. The Bearcats won in 2020 and 2021, when they finished the regular season as the nation’s only undefeated team and later lost to Alabama in the College Football Playoff semifinals.

UCF quarterback John Rys Plumlee is averaging 258.9 yards passing while also rushing for 72.3 yards per game. The Ole Miss transfer has thrown for 11 touchdowns and run for seven more.

“He’s going to be uniquely different than anybody probably that we’ve faced as far as a running quarterback,” Fickell said.

But Plumlee has thrown six interceptions, with three of coming during the loss at East Carolina. The Knights turned the ball over four times overall.

“When we don’t turn the ball over, we’re a pretty good offense,” Malzahn said.

Cincinnati linebacker Ivan Pace Jr. leads the nation with 14½ tackles for loss and is tied for first with seven sacks.

The Bearcats average 4.1 sacks per game, and the defense has scored a nation-leading four touchdowns off turnovers.