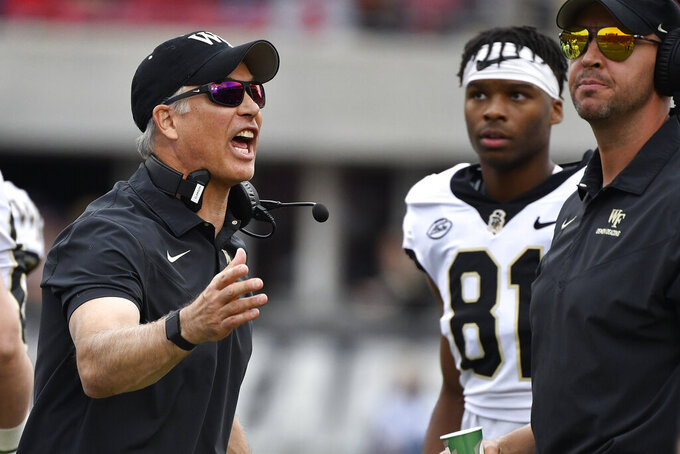 By Saturday, they will each be the focus on the 20th-ranked Demon Deacons' visit to the 21st-ranked Wolfpack. For Wake Forest, the question is whether Hartman can shake off an awful performance in last week's loss at Louisville. And Morris is now a rising prospect set to start after leading N.C. State's second-half comeback over Virginia Tech.

“(Life) has changed a little bit,” Morris said. “Of course, I'm getting a lot more notice now. A few more people know me around campus, but I try not to let it get to my head. ... I'm still out there doing my job for the team so that we can execute at our best level.”

N.C. State (6-2, 2-2 ACC) lost starter Devin Leary to a season-ending injury in October, lost at No. 22 Syracuse and then found itself down big in the third quarter to the Hokies last week. Morris took over for Jack Chambers after halftime and threw three touchdown passes, showing growing confidence in pushing the ball downfield as the Wolfpack loosened up a conservative game plan.

Now he's the starter against the Demon Deacons (6-2, 2-2), a long way from the days of getting few preseason reps behind Leary and Chambers.

“To MJ's credit, he would stand behind our offense and he was very diligent in mental reps and going through the the play on air," coach Dave Doeren said. “And now he's getting physical reps, so that's only going to accelerate his ability to function and do more within the system.”

Hartman, meanwhile, comes in hoping to distance himself from last weekend's performance. He threw three interceptions — two returned for touchdowns — and lost three fumbles, all in the third quarter as Louisville blew the game open.

It was reminiscent of Hartman's turnover-filled performances in the Duke's Mayo Bowl loss to Wisconsin to end the 2020 season or the loss to Pittsburgh in last year's ACC title game. But coach Dave Clawson defended his quarterback.

“We made a lot of mistakes that we can't afford to make," Clawson said. "Clearly the eight turnovers, you're never going to win a football game doing that. And we had other execution issues.

"This whole narrative of Sam having another one of those meltdown games, that's not accurate at all with this game. You go back and watch the film, and he's probably responsible for maybe one, one and a half of those turnovers.”

Before the Louisville loss, the Demon Deacons had scored at least 31 points in every game while generally avoiding self-inflicted mistakes. Still, they’re ranked 13th in the Bowl Subdivision in averaging 38.9 points.

And Hartman is tied for sixth in FBS by throwing 22 touchdown passes with a trio of matchup-winning targets in wideouts Donavon Greene, Jahmal Banks and A.T. Perry.

The past two meetings of the every-year series have curiously ended with identical scores.

The Wolfpack won at home 45-42 early in 2020, while the Demon Deacons won at home last year by the same score in a game that largely determined the ACC Atlantic Division title.

N.C. State has proven ability to push back when falling behind.

The Wolfpack's last two home games included second-half comebacks from double-digit deficits. First there was a rally from a 17-3 halftime deficit to beat Florida State 19-17 behind a terrific defensive performance.

N.C. State has won 15 straight home games since a loss to Miami in 2020. A win Saturday would tie the program record set from 1972-75 under Lou Holtz.

Hartman has 94 career touchdown passes and is one shy of tying former N.C. State great and longtime NFL quarterback Philip Rivers for No. 2 on the ACC list of career passing touchdowns.