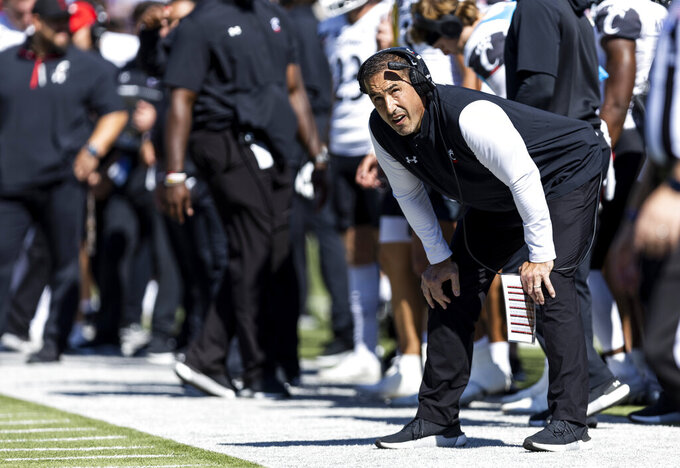 Cincinnati head coach Luke Fickell looks on from the sidelines during the first half of an NCAA college football game against SMU, Saturday, Oct. 22, 2022, in Dallas. (AP Photo/Brandon Wade) 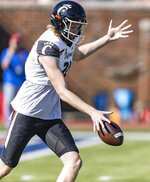 DALLAS (AP) — Style points were in short supply Saturday when No. 21 Cinncinnati held on to beat SMU, but linebacker Wilson Huber wasn't concerned after the Bearcats prevailed, 29-27.

“It wasn’t pretty and it wasn’t perfect, but ultimately it was good enough to get the job done,” Huber said after Cinncinnati stretched its winning streak to six games.

Ryan Coe kicked a school-record five field goals, including a season-long 52-yarder, and No. 21 Cincinnati broke up a game-tying two-point play in the closing minutes.

Charles McClelland and Ryan Montgomery scored on runs of 76 yards and 1 yard for the Bearcats (6-1, 3-0 American), who won their 19th in a row against American Athletic Conference opponents.

Tyler Lavine scored on a 1-yard plunge with 1:57 left to pull SMU (3-4, 1-2) within two, but Preston Stone’s 2-point conversion pass intended for Roderick Daniels Jr. in the near corner of the end zone was incomplete.

Three of the Bearcats’ 14 penalties came on SMU’s last scoring drive, one that negated an interception.

On Cincinnati’s subsequent drive, quarterback Ben Bryant – who sustained a concussion in the fourth quarter of last week’s win against USF – completed a nine-yard pass on third-and-8 to allow the Bearcats to maintain possession for the balance of the game.

“In the gotta-have-it situations, we made the plays, both defensively and offensively,” Bearcats coach Luke Fickell said.

Stone, a redshirt freshman, replaced starter Tanner Mordecai, who left the game and the field late in the third quarter with an undisclosed injury.

“You prepare for a moment like this,” Stone said. “Felt like I was going out to play little league.”

Coe’s 52-yarder came with a stiff wind at his back, and his other field goals were from 44, 31, 30 and 25 yards. He’s in his first season at Cincinnati after kicking for Delaware, where he hit from 53 yards. Coe had a 45-yard attempt blocked in the fourth quarter.

“I think I’ve shown enough confidence in practice for them to send me out, and it came to fruition today,” Coe said.

Cincinnati’s Mason Fletcher boomed an 84-yard punt with the wind following the Bearcats’ first possession for the longest punt in college football this season and an AAC and school record. The sophomore from Australia made contact at Cincinnati’s 5-yard line. The ball landed at SMU’s 20 and bounced into the end zone for a touchback.

“He is really talented,” Fickell said of Fletcher. “He does nothing but get better each and every week.”

“We put ourselves in position to beat somebody that nobody hardly ever beats in our league and didn’t get it done,” SMU coach Rhett Lashlee said.

Mordecai was 15 of 25 for 105 yards, one touchdown and one interception and was sacked five times. Stone was 6 for 15 for 74 yards and one touchdown.

Fickell’s 54th Cincinnati victory makes him the program’s all-time leader. … Cincinnati receiver Tyler Scott, who was sidelined last week in the first quarter with an ankle injury, didn’t dress out. … Bearcats defensive end Jabari Taylor left in the first quarter with an injury. … Members of the 1981-82 SMU teams that went 21-1-1 and won Southwest Conference championships were recognized on the field.

Two of the three teams just ahead of Cincinnati in the poll (No. 18 Illinois, No. 19 Kentucky) were off Saturday. Is a two-point win enough for the Bearcats to rise a few spots?

CINCINNATI: After reaching last season’s College Football Playoff, the realistic goal as the top-ranked team from the Group of 5 continues to be a third consecutive New Year’s Six bowl.

SMU: Are six wins and a bowl invitation within reach for the Mustangs with home games against Houston and Memphis and a trip to Tulane remaining?

SMU: Plays at Tulsa next Saturday.