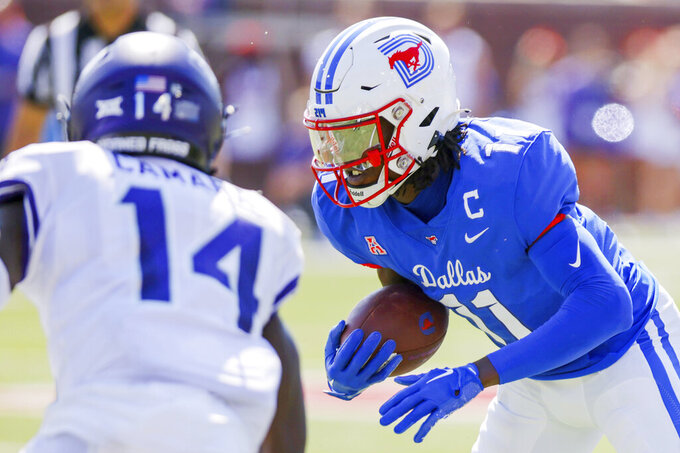 Line: Cincinnati by 3 1/2, according to FanDuel Sportsbook.

Cincinnati has a five-game winning streak since opening the season with a loss at Arkansas that pretty much eliminated any chance to get to a second straight College Football Playoff. But the Bearcats, coming off an open date, are still in pursuit of their third American Athletic Conference title before departing for the Big 12 next season. The Bearcats have won their last 18 AAC games, including the last conference championship games. SMU is coming off a 40-34 win over Navy that ended a three-game losing streak.

SMU QB Tanner Mordecai vs. the Cincinnati defense. Mordecai threw for 336 yards in the win over Navy to match the school record with his 12th career 300-yard game. He is the league's top passer and third nationally with 336 yards per game, and he has 15 TDs. The Bearcats give up only 186 yards passing per game and are tied for second in the league with six interceptions. They also lead the league with 3.8 sacks per game.

Cincinnati: LB Ivan Pace leads the American with 10.3 tackles per game. His 12 1/2 tackles for loss and five sacks are also league highs. His TFLs are the most nationally.

Bearcats coach Luke Fickell is going for his 54th career win, which would break a tie with Rick Minter for the most in school history. ... Cincinnati RB Charles McClelland had a career-best 179 yards rushing and two TDs against USF, including the go-ahead 35-yard score in the fourth quarter of the 28-24 win. ... The Mustangs have had at least 500 yards of offense in 13 of their last 26 games. ... Cincinnati leads the nation with 9.7 tackles for loss per game and four defensive touchdowns. ... SMU has won 16 of its last 19 home games.