No. 21 Tar Heels take division chase into game vs Pittsburgh 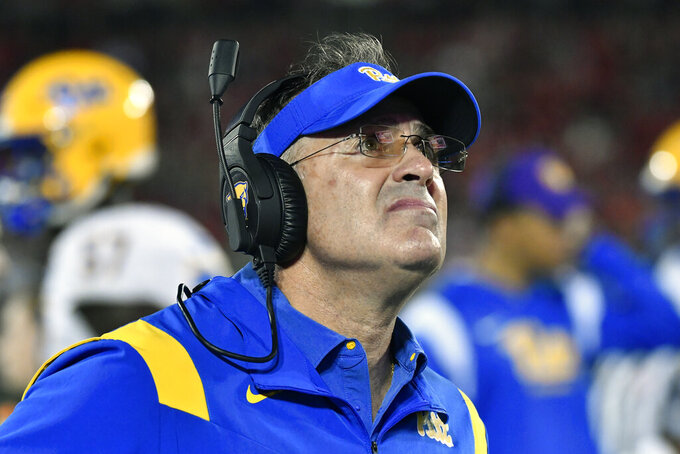 North Carolina coach Mack Brown spent an open date experiencing “one of the joys of my life" by watching college football games and not experiencing the sideline pressure himself.

He will get plenty of that in the weeks ahead with his 21st-ranked Tar Heels leading their Atlantic Coast Conference division race.

The first post-bye test comes Saturday with a visit from Pittsburgh. The game represents a chance for the Tar Heels (6-1, 3-0 ACC) to add to a cushion in the Coastal Division — even Brown said he isn't talking a lot with his team about it just yet.

As he put it: “Why talk about the Coastal until you win it?"

“You've got to earn your right and we've got a five-game season and five very difficult games,” he said. “So we shouldn't be thinking about anything except Pitt."

The Tar Heels are led by Drake Maye and one of the nation's top offenses, which has provided cover for one of the nation's worst defenses. UNC has at least a two-game lead in the loss column on the division's other six teams, including wins at Miami and Duke.

The Panthers (4-3, 1-2) are the reigning league and division champions. They took third-ranked Tennessee to overtime early in the season but lost at home to Georgia Tech to open October and they're coming off a loss at Louisville in which they managed just 10 points and no touchdowns after the third quarter.

Pitt has lost seven turnovers in its two league losses.

“Always impressed with the way our guys play,” Pitt coach Pat Narduzzi said. “They hang in there. They fight. We've just got to protect the football or you can't win games.”

Whatever margin of error Pitt had in its bid to return to the ACC title game likely vanished following the Louisville loss.

USC transfer quarterback Kedon Slovis has struggled since returning from an injury suffered just before halftime of a loss to Tennessee in early September. He's thrown three touchdowns against four interceptions in his last four games, though Narduzzi isn't hurrying to make a change.

This series has been filled with close games, particularly since becoming a league matchup with Pittsburgh's arrival for the 2013 season.

Pittsburgh has won the past two games, each by seven points, at home. And the six before that were all decided by seven or fewer points, including a wild 37-36 win for UNC in 2016 on a last-second touchdown pass by eventual No. 2 overall NFL draft pick Mitch Trubisky.

The Panthers have a least one advantage: running back Israel Abanikanda. He is fourth nationally in rushing (137.0) and tied for first with 13 rushing TDs. He also had 320 yards against Virginia Tech for the highest output by any Bowl Subdivision player this year.

UNC has gotten an offensive boost from receiver Antoine Green in providing a reliable target.

He missed the first three games with a broken collarbone, but has twice cracked 100 yards and hauled in four TD catches in his four games. That included four grabs for 112 yards and the late winning score at Duke.

That represents a huge change from last year, when the Tar Heels didn't find a consistent second threat to pair with Josh Downs.

The Tar Heels are playing the rest of the season without starting defensive lineman Ray Vohasek due to an upper-body injury. That's a blow for a defense that already ranks 126th out of 131 FBS teams in total defense (476.3) and tied for 113th in scoring defense (32.4).