No. 22 K-State, Kansas meet off wins in Sunflower Showdown 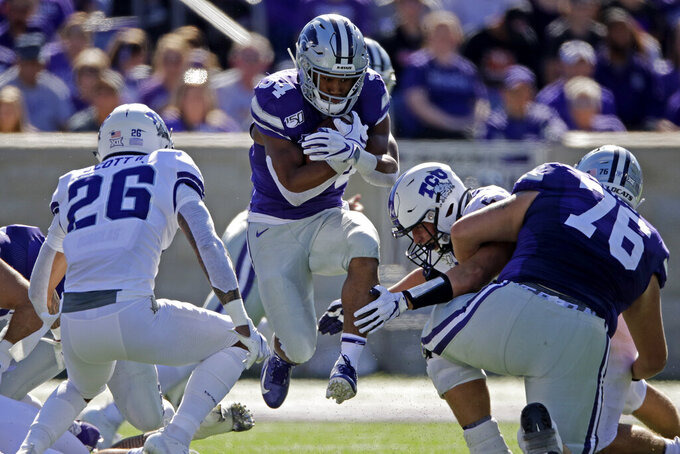 Kansas State is trying to build on a startling upset of then-No. 5 Oklahoma last week, and perhaps make a late-season run at the Big 12 title game. Kansas is coming off a win over Texas Tech and is holding out hope of reaching six wins to qualify for a bowl game.

Kansas RB Pooka Williams against the Kansas State rush defense, which was excellent against the Sooners but has been iffy this season. The Wildcats rank No. 89 nationally against the run. Williams was suspended for the Jayhawks' opener but still has 704 yards rushing on just 136 carries this season.

Kansas: QB Carter Stanley has gone from the weakest link in the Jayhawks' offense to a key cog, and the difference has been tied to new offensive coordinator Brent Dearmon. Stanley has thrown for 1,900 yards with 19 touchdowns and just five interceptions.

Kansas State: RBs James Gilbert and Jordon Brown lead the way on the ground against Oklahoma, helping pace a rushing attack that had 213 yards. Gilbert led the way but Brown, who had just come back from an injury, provided the Wildcats with a nice change of pace.

Kansas State has beaten the Jayhawks the past 11 meetings. That ties the longest streak in the series, held by the Wildcats from 1993-2003. ... Kansas State is seeking its sixth straight win in Lawrence, a school record for the series. ... The schools are meeting for the 108th consecutive year, trailing only Minnesota-Wisconsin (112), Clemson-South Carolina (1120) and North Carolina State-Wake Forest (109). ... This will be the first meeting between Kansas State (Chris Klieman) and Kansas (Les Miles) each with new head coaches since 1986. ... Since being promoted, Dearmon's offense at Kansas has averaged 548 yards per game. ... Kansas WR Stephon Robinson has nation-leading six receiving TDs over the past three games. ... Kansas State has allowed just four passing touchdowns through seven games. It is tied with Ohio State, Kentucky and Penn State for fewest nationally. ... The Wildcats have committed just three offensive turnovers through their first seven games.