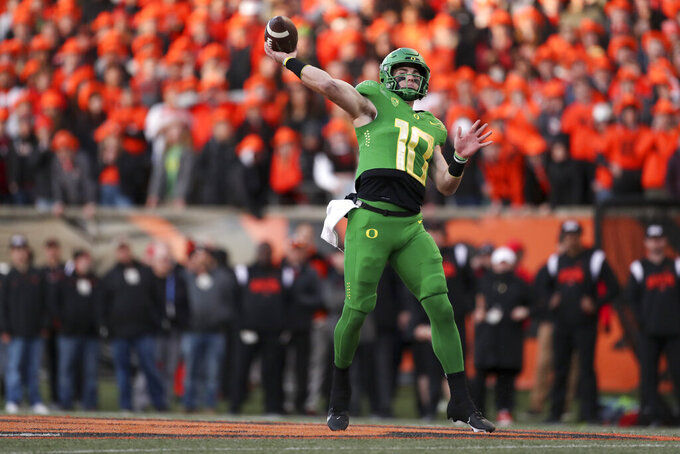 CORVALLIS, Ore. (AP) — Isaiah Newell ran for the go-ahead touchdown with 8:11 remaining, and No. 22 Oregon State took advantage of critical mistakes in the fourth quarter by No. 10 Oregon to rally for a 38-34 victory Saturday.

Oregon missed out on a spot in the Pac-12 championship game when No. 12 Washington beat Washington State later Saturday. No. 14 Utah won a tiebreaker and will face No. 5 Southern California on Friday for the league title.

Oregon State concluded by far its best regular season under fifth-year coach Jonathan Smith, who took over a program that went 1-11 in 2017.

“Didn’t play our best for a long period of time,” Smith said. “But knowing this game was a long, long game, they found a way at the end.”

The Beavers couldn't have done it without plenty of help from the Ducks.

First, Oregon gave up a 48-yard kickoff return by Silas Bolden, and a facemask penalty set up Oregon State at the Ducks 36. Newell ran for a 15-yard touchdown to make it 34-24.

Next, Oregon punter Alex Bales dropped the snap and fell on the ball at his own 2. Two plays later, quarterback Ben Gulbranson pounded it in from the 1 to get Oregon State to 34-31.

Oregon then went for it on fourth-and-1 at its own 29, and Bo Nix was stopped for a 1-yard loss on the Ducks' only called QB run of the game. Newell scored four plays later, with a convoy of blockers helping to push him into the end zone from 6 yards out.

Oregon State ran for 268 yards and five touchdowns, overcoming its lack of a passing game.

“We had the ability to execute when it mattered,” said guard Brandon Kipper, who was honored along with the entire senior class before the game. “There’s really no words to describe what that just felt like.”

Damien Martinez led the way with 103 yards on 15 carries, his sixth consecutive 100-yard game. Gulbranson was just 6 of 13 for 60 yards with two interceptions, but he ran for two scores. Newell scored on his only two carries.

Nix passed for 327 yards and two touchdowns and Oregon finished with 470 total yards, but Nix's limited mobility because of a right ankle injury was a major factor.

After Oregon State's go-ahead score, Nix drove the Ducks to the Beavers 2, but Jordan James was stuffed for a 1-yard loss on third down. On fourth down, Nix's pass intended for Troy Franklin in the end zone was low and incomplete.

“We had our chances and couldn’t convert,” Nix said, “and maybe should have done some things differently.”

The Beavers converted the one first down they needed to run out the clock.

“Coach Smith was very well prepared for this game,” first-year Oregon coach Dan Lanning said. “We were prepared for half or three quarters of the game as it turned out.”

Oregon led 14-10 at halftime, and early in the second half it was the Beavers whose errors led to scores.

Oregon State forced a three-and-out to start the third quarter, but Gulbranson’s first-down pass over the middle intended for Silas Bolden was intercepted by linebacker Jeffrey Bassa, who returned it 33 yards to the 2.

James ran for a touchdown on the next play to make it 21-10.

Oregon State’s third turnover — a fumble by Tre'Shaun Harrison after a 1-yard reception — gave the Ducks another short field. Camden Lewis converted a 42-yard field goal, extending the lead to 31-10 with 4:46 left in the quarter.

Nix threw both of his TD passes in the first half. He hit Chase Coda for a 44-yard score in the first quarter. Then he connected with Franklin for a 9-yard TD with 12 seconds left in the half, completing a 13-play, 95-yard drive.

Oregon: Nix didn’t have his usual dual-threat capability, and it was never more apparent than on that critical fourth-down run.