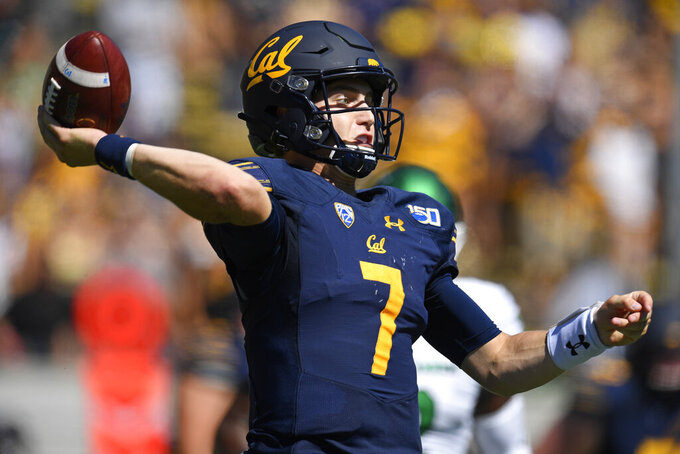 California quarterback Chase Garbers (7) looks to pass the ball against North Texas during the first half of an NCAA college football game at Memorial Stadium in Berkeley, Calif., on Saturday, Sept. 14, 2019. (Jose Carlos Fajardo/San Jose Mercury News via AP)

The Ole Miss rushing attack vs. the Cal run defense: After getting held to 80 yards rushing on 33 carries in a season-opening loss to Memphis, Ole Miss has run for at least 220 yards in each of its last two games. California has allowed just 129.3 yards rushing per game and 3.6 yards per carry.

Cal: LB Evan Weaver: He has 41 total tackles to lead all Football Bowl Subdivision performers, and his 13.7 tackles per game rank fourth nationally. He has made at least 10 tackles in 10 straight games. He collected 18 tackles, forced a fumble and recorded a sack in a road upset of then-No. 14 Washington.

Ole Miss: RB Scottie Phillips: He averages 102.7 yards rushing per game to rank third in the Southeastern Conference. He has four touchdown runs this season and has gained over 100 yards in each of his last two games.

Cal has held its last 10 opponents below 24 points, a stretch that began last season. ... Ole Miss' offensive and defensive coordinators are both former Pac-12 head coaches — offensive coordinator Rich Rodriguez (Arizona) and defensive coordinator Mike MacIntyre (Colorado). ... Cal owns an 8-0 regular-season nonconference record during Justin Wilcox's coaching tenure. The Golden Bears did lose to TCU in the Cheez-It Bowl last season. ... Ole Miss hasn't lost a nonconference home game since 2012. ... Ole Miss has collected at least eight tackles for loss in each of its three games. ... These two teams last faced each other in 2017, when Cal beat the visiting Rebels 27-16. ... Ole Miss' Jerrion Ealy has 367 all-purpose yards, the second-highest total for a true freshman this season. Ealy scored on a 94-yard kickoff return in a victory over Southeastern Louisiana last week.