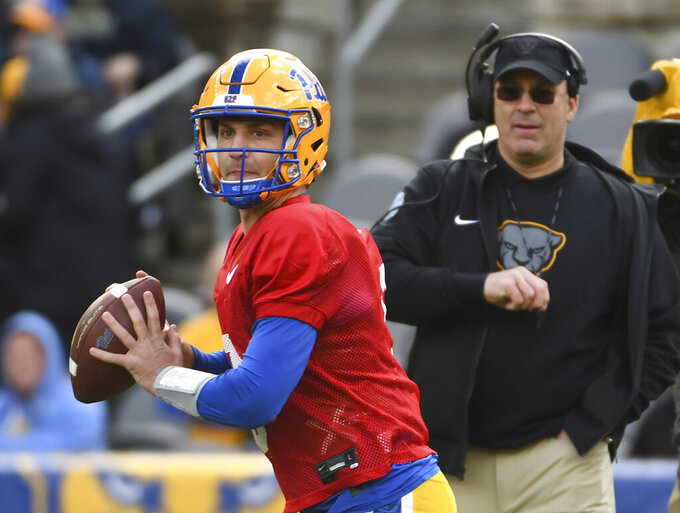 Line: Pitt by 10½, according to FanDuel Sportsbook.

Pitt makes a rare road trip to a non-Power Five school eyeing revenge after the Broncos stunned the Panthers 44-41 last year in Pittsburgh. The Panthers recovered from the upset to claim their first ACC championship, though the loss took them out of any remote chance of crashing the College Football Playoff. Those hopes are likely gone again after falling in overtime to Tennessee last week. The Broncos hung tough for three quarters at Michigan State in the opener before falling late. Knocking off a ranked Power Five team at home would give the program a serious boost heading into conference play.

Pitt's linebackers against Western Michigan QB Jack Salopek. The Broncos torched the Panthers for 517 yards of total offense last September, most of the yards coming as former QB Kaleb Eleby executed Western Michigan's run/pass option offense by freezing Pitt's linebackers with fakes then picked apart the Panthers secondary. Salopek, a redshirt freshman who grew up about 30 miles from the Pitt campus, shouldn't lack for motivation while facing the Panthers.

Pitt: RB Israel Abanikanda. The junior had a long overdue breakout performance last week against Tennessee, rushing for a career-best 154 yards, including a 76-yard sprint to the end zone that marked the longest run by a Panther in nearly four years. With Rodney Hammond's status uncertain with a left leg injury, Abanikanda may finally have created some separation in what has been a crowded backfield for most of the last three seasons.

Western Michigan: DL Braden Fiske. The junior was named MAC West Defensive Player of the Week after a standout performance in a victory over Ball State last Saturday. Fiske forced a fumble that led to a scoring drive, broke up a pass and finished with six tackles in all. Pitt's offensive line has been spotty during the first couple of weeks and with it unclear who will be at quarterback for the Panthers after Kedon Slovis and Nick Patti were injured against Tennessee.

The Panthers have won six straight road games dating back to the 2020 season. ... Pitt is 32-5 all-time against MAC teams, including a 4-2 mark on the road. ... Western Michigan WR Corey Crooms has 15 receptions through two games. Crooms like up Pitt for eight catches, 161 yards and a touchdown last season. ... Broncos RB Sean Tyler is averaging 6.3 yards per carry through two games, the same number he averaged last season while topping 1,000 yards for the first time. ... Western Michigan last hosted a Power Five team in 2015 when it welcomed Michigan State in what became a 37-24 loss. The Broncos are 0-4 all-time at home against Power Five teams. ... Pitt safety Erick Hallett II has recovered a fumble in each of the Panthers' first two games, tying him for the FBS lead.