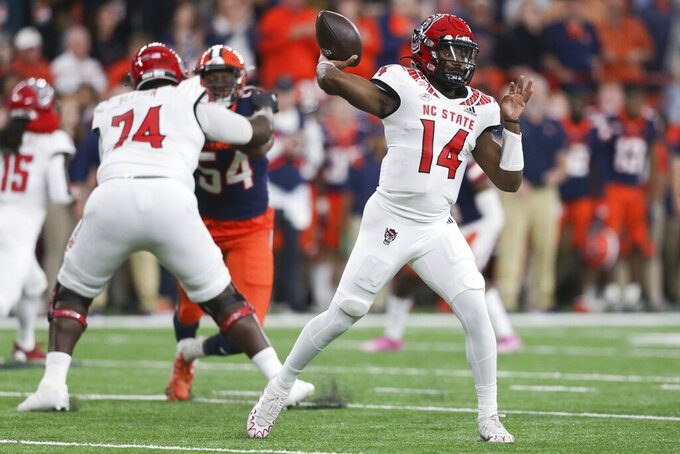 North Carolina State quarterback Jack Chambers (14) throws a pass during the first half of an NCAA college football game against Syracuse on Saturday, Oct. 15, 2022, in Syracuse, N.Y. (AP Photo/Joshua Bessex)

RALEIGH, N.C. (AP) — North Carolina State needed its open date for a chance to tweak its offense after losing the preseason Atlantic Coast Conference player of the year at quarterback.

The first chance to find out how well it works for the 24th-ranked Wolfpack comes with Thursday night's visit from Virginia Tech.

Charleston Southern graduate transfer Jack Chambers is atop the depth chart at quarterback now that Devin Leary is lost to injury for the rest of the season. Chambers has now worked as the starter for five-plus quarters since Leary went down in the Oct. 8 win against Florida State. He's relied heavily on his legs to make plays and the offense has yet to reach the end zone.

After last week's loss at No. 16 Syracuse, the Wolfpack (5-2, 1-2 ACC) had a bye week to figure out how to better take advantage of Chambers' skills. It also allowed for Chambers to get more reps as the starter.

“We're not going to turn (and) run the triple option,” coach Dave Doeren said. “But we do have a quarterback that can do some things.... So he'll see it grow probably as it goes.”

The Hokies (2-5, 1-3) are in a different position under first-year coach Brent Pry. Virginia Tech has lost four straight games since beating Wofford on Sept. 17.

Offense, in particular, has been a problem. The Hokies have yet to hit 30 points and have failed to score more than 14 in three games during their current skid.

“We’ve got to continue to get better," Pry said. “I’m still waiting for us to play that complete game, to be consistent, handle all the things that are thrown at you over the course of four quarters in all three phases.”

Chambers ran seven times for 39 yards and didn’t complete his only pass after taking over against FSU. At Syracuse, he ran 19 times for 58 yards while completing 18 of 30 passes for 160 yards.

“He’s calm," Doeren said. "He’s competed in a lot of settings in his career. ... He doesn’t get rattled, and I think that’s good for the guys to see.”

Chambers is a former all-Big South Conference pick who threw for 405 yards in a loss at East Carolina last year.

“It's just being more comfortable with this offense, just taking control and just making sure we're all on the same page," Chambers said. "It helps getting the reps with the guys you're going to be out there with.”

Hokies quarterback Grant Wells has thrown for seven touchdowns and run for three more, and Pry has been complimentary of Wells’ play. But he said flashes of success – such as two fourth-quarter scoring drives in the loss to Miami — must become more consistent.

“Grant's got to make plays, and he can do that,” Pry said, adding: “I think, again, there’s enough evidence there that we can do some things to score some points. We’ve just got to put it all together.”

Pry used extra time from an off weekend to reiterate to his team that they aren't far from being able to turn the corner.

“The positive is there are positives,” he said. “There’s encouraging things in each and every one of these losses that we can build on. And the players see it’s not me just standing up in front of the team saying, `”Hey, listen, we’re doing good things. Here they are.’”

N.C. State has won 14 straight home games since falling to Miami in 2020. That streak is the nation's sixth-longest active run and two shy of tying the program record set from 1972-75 under Lou Holtz.

N.C. State and Virginia Tech have only met six times since the Hokies joined the ACC in the 2004 season, with the Hokies winning five. Virginia Tech won the last meeting in Raleigh behind eventual NFL quarterback Tyrod Taylor in October 2010. The Hokies claimed the last two meetings at home in 2015 and 2020.