No. 24 Texas hosts Baylor, still has shot at B12 title game 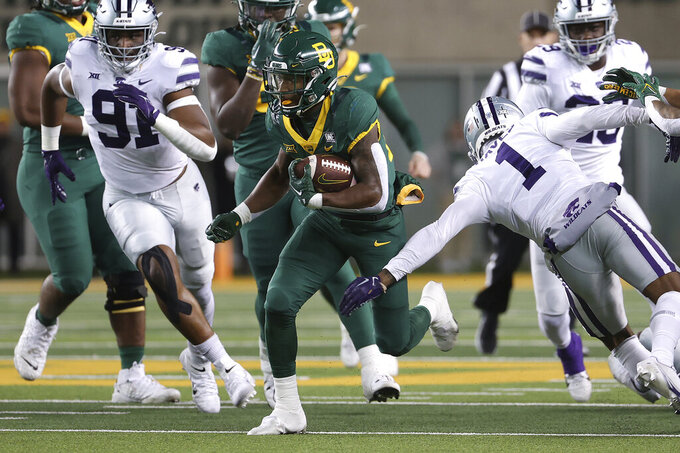 Baylor running back Richard Reese (29) breaks through a tackle of Kansas State safety Josh Hayes (1) in the first half of an NCAA college football game, Saturday, Nov. 12, 2022, in Waco, Texas. (AP Photo/Jerry Larson)

Texas still has a chance to get to the Big 12 championship game. The Longhorns, whose three league losses are by a combined 17 points, first have to win their regular-season finale. They would then have to wait until Saturday night, when No. 15 Kansas State (8-3, 6-2, No. 12 CFP) would have to lose at home to Kansas, which is coming off a 55-14 home loss to Texas. Baylor, last season's Big 12 champs, fell out of contention to repeat by losing its last two home games after two consecutive road wins.

Texas RB Bijan Robinson vs. Baylor defense. Robinson is the Big 12 leader with 1,400 yards rushing (127.3 per game) and his 16 rushing TDs. He had career bests with 243 yards and four TDs rushing last week against Kansas, a week after TCU limited him to 29 yards. Baylor, which is third in the Big 12 allowing only 131.2 yards rushing per game, has limited Robinson to 98 yards in their previous two meetings (55 and 43 yards).

Baylor: True freshman RB Richard Reese is 92 yards shy of becoming the Big 12's sixth 1,000-yard rusher this season. He has 14 rushing TDs and his 908 yards is already a freshman school record that ranks second nationally for freshmen. Texas is second in the Big 12, allowing only 125 yards rushing per game.

Texas: LB Jaylan Ford is second in the Big 12 with 96 tackles (8.7 per game), and is the league leader for forced fumbles (three), interceptions by a linebacker (three) and fumble recoveries (two). All of his interceptions have led to Texas TDs going into halftime.

After going 5-1 against ranked teams in 2021, Baylor is 0-4 facing Top 25 opponents so far this season. ... Texas is one of four FBS schools with two players with at least 2,000 career yards rushing (Johnson and Roschon Johnson). ... Ja'Tavion Sanders has 47 catches, only three short of matching the single-season Texas record for a tight end. ... Baylor LT Connor Galvin is set to make his 49th career start, which would break his tie with Spencer Drango (2012-15) for the school record.