No. 25 James Madison looks to continue roll at Ga Southern 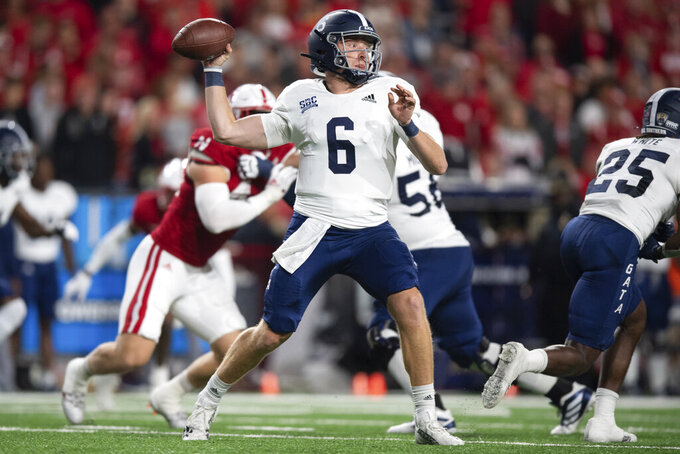 STATESBORO, Ga. (AP) — James Madison is experiencing success on an unprecedented timetable, landing its first AP Top 25 ranking in its first season in the Bowl Subdivision.

Heady times, indeed, but it's only one step for the Dukes, according to coach Curt Cignetti.

Another milestone could come Saturday when No. 25 James Madison visits Georgia Southern in a Sun Belt Conference game. With a win, the Dukes (5-0, 3-0 Sun Belt) would achieve the first 6-0 start for a first-year FBS program.

James Madison is relishing the quick rise to national recognition.

“I think that is great publicity for the university, our program, athletic department, our boosters, the people that care so much about James Madison and followed them through the years,” Cignetti said.

“It’s sort of another barrier, took another step. It’s not a final destination and obviously doesn’t affect anything that’s going to go on between the lines and our guys understand that, too.”

Cignetti called the ranking “last week’s statement” and added “what you do on Saturday is this week’s news.”

Georgia Southern (3-3, 0-2) started strong this season, including a 45-42 win at Nebraska on Sept. 10, which helped finalize the decision to fire Cornhuskers coach Scott Frost.

“When you play a game where you have five turnovers and have a lot of self-inflicted wounds, those are the games you’re going to lose in the fourth quarter,” said Georgia Southern first-year coach Clay Helton.

“Sometimes, stat sheets say one thing and when you watch the game it was a collective effort,” Helton said, adding that Vantrease “played like a warrior.”

“The one thing about Kyle that I was really impressed with was his demeanor the whole way through,” Helton said. “He never got down, he continued to say next drive, next drive.”

The Dukes rank No. 15 with their average of 15 points allowed per game.

“They have one of the best defenses not only in this league but in the country,” Helton said. “They have a team that warrants being talked about nationally and they deserve the ranking they have.”

Though he's still looking for his first conference win at Georgia Southern, Helton says the Eagles are on schedule.

James Madison quarterback Todd Centeio began his career at Temple before transferring to Colorado State. He then moved to James Madison as a graduate student this year and has flourished in his third home.

Centeio has passed for 15 touchdowns with only one interception. He earned his second Sun Belt offensive player of the week award after passing for a season-high 394 yards with four touchdowns in last week’s 42-20 win over Arkansas State.

With his 15 TD passes, Centeio already has matched his 2021 total in 12 starts for Colorado State.

The Dukes must look back at their years as an FCS contender to remember Georgia Southern is a difficult place to win. The Eagles are 7-1 in their series against the Dukes, including 4-0 in Statesboro. The teams last played in 1992.