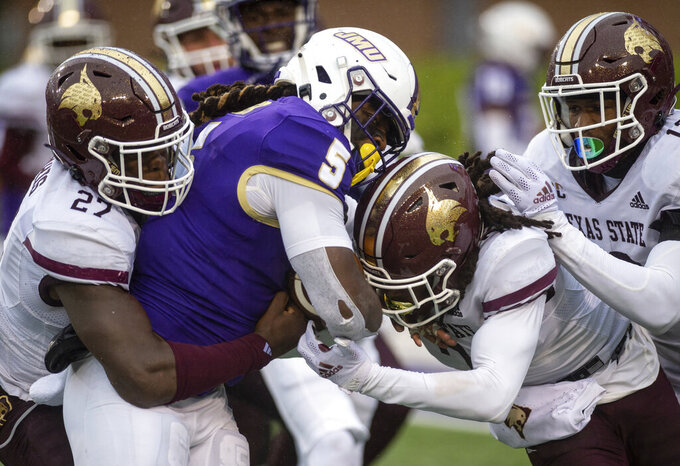 James Madison running back Latrele Palmer (5) fights his way through a mob of Texas State defenders during the second half of an NCAA football game in Harrisonburg, Va., Saturday, Oct. 1, 2022. (Daniel Lin/Daily News-Record Via AP)

Line: James Madison by 12 1/2, according to FanDuel Sportsbook.

James Madison will try to protect its unbeaten record after moving into the AP Top 25 for the first time. The Dukes also will try to maintain their share of the Sun Belt Conference Eastern Division lead with Coastal Carolina. Georgia Southern will look for its eighth straight win in the series, though the teams have not played since 1992. The Eagles, who won 45-42 at Nebraska on Sept. 10, will try to snap a two-game losing streak with their first conference win.

James Madison WR Kris Thornton vs. Georgia Southern secondary. Thornton has been the Dukes' most productive wide receiver. The senior had nine catches for 173 yards in last week's 42-20 win at Arkansas State. It was his third game with at least 100 yards this season.

James Madison: QB Todd Centeio, a graduate student and Colorado State transfer, has passed for 15 touchdowns with only one interception. He completed 28 of 37 passes for a season-high 394 yards with four touchdowns to lead the Dukes against Arkansas State. He was named Sun Belt offensive player of the week for the second time this season.

Georgia Southern: QB Kyle Vantrease has already set the school's single-season passing record with 1,933 yards. The Eagles had a long tradition of running the triple-option. Vantrease threw for 359 yards in last week's 41-33 loss at Georgia State. Antonio Henton threw for 1,852 yards in 2008.