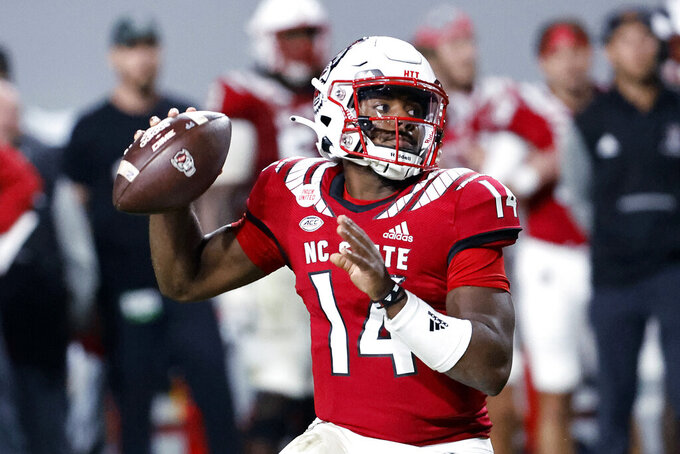 North Carolina State quarterback Jack Chambers (14) prepares to throw a pass against Florida State during the second half of an NCAA college football game in Raleigh, N.C., Saturday, Oct. 8, 2022. (AP Photo/Karl B DeBlaker)

Here are things to watch in the Atlantic Coast Conference in Week 7:

No. 4 Clemson at Florida State. The Tigers (6-0, 4-0 ACC) have the chance to stay unbeaten in league play with another Atlantic Division game. Winning against the Seminoles (4-2, 2-2) would give the Tigers a firmer grip on the division race ahead of a trip to No. 18 Syracuse next week.

As for FSU, Mike Norvell's team has lost two straight division games against ranked opponents, most recently by blowing a 17-3 lead at No. 15 North Carolina State last weekend.

While Clemson and FSU offer a headlining matchup for the Tigers, N.C. State's visit to Syracuse on Saturday offers another critical matchup between teams with strong defenses.

The Wolfpack's veteran unit helped lead the comeback win against FSU, holding the Seminoles to fewer than 100 yards after halftime. The Orange's defense ranks ninth in the Bowl Subdivision by holding opponents to 14.0 points per game.

Virginia Tech was a 7-point underdog at home against Miami as of Wednesday night. The Hokies have lost three straight and four of five meetings against the Hurricanes.

More concerning is the fact first-year coach Brent Pry's team has surrendered 86 points in the last two losses against North Carolina and Pittsburgh.

Six of the league's 14 teams are on a bye week, leaving a schedule of four division games. ... North Carolina enters Saturday’s trip to rival Duke averaging 42.3 points to rank eighth in FBS. ... Clemson's 12-game winning streak is the longest active streak in the country. ... Clemson and Syracuse are two of 15 unbeaten FBS teams in the country. ... The Orange's 5-0 start is the program's first since 1987. ... No. 14 Wake Forest has been in the AP Top 25 poll for a school-record 19 straight polls, which is the longest active streak in the league. ... N.C. State's current 13-week poll streak is the program's longest since appearing in 22 straight from 1992-93.

North Carolina receiver Josh Downs continues to find the end zone entering Saturday's trip to rival Duke. Downs has five TD grabs in four games this season, while his lone outing without a touchdown marked his season high with 120 yards receiving. Downs erupted into a top target last season for Sam Howell and is doing the same for Drake May despite missing time due to injury.