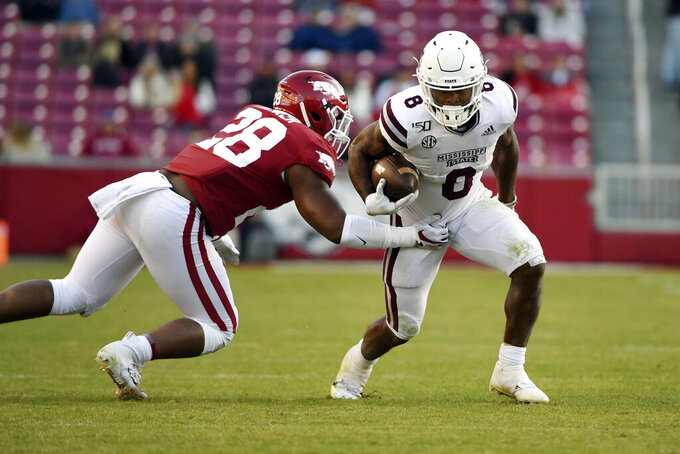 Mississippi State running back Kylin Hill (8) shakes Arkansas defender Andrew Parker (28) as he runs for a gain during the second half of an NCAA college football game, Saturday, Nov. 2, 2019, in Fayetteville, Ark. (AP Photo/Michael Woods)

Alabama must adjust to life without star quarterback Tua Tagovailoa, who had hip surgery on Monday. The Crimson Tide is still hoping for a playoff shot. Western Carolina is seeking its first win over an FBS team, coming in 0-56.

Alabama: WR/PR Jaylen Waddle is often overlooked in a crowded group of receivers. With Henry Ruggs III questionable with an injury, Waddle could get targeted more frequently and is dangerous with the ball in his hands. He’s also the nation’s leading punt returner, averaging 23.9 yards per return.

This will be the second career start for Jones, who was 18-of-22 passing for 235 yards and three touchdowns against Arkansas. ... Western Carolina is 0-19 against SEC teams. The Tide has won the first four meetings by a combined 201-20. ... Alabama’s string of seven straight seasons with at least one defensive shutout is in jeopardy. The Tide has shut out at least two opponents each year during that streak and held Western Carolina scoreless twice in their four previous meetings. ... Alabama defensive linemen Raekwon Davis and D.J. Dale are both questionable with injuries.