No. 5 Alabama visits No. 16 Auburn in Iron Bowl 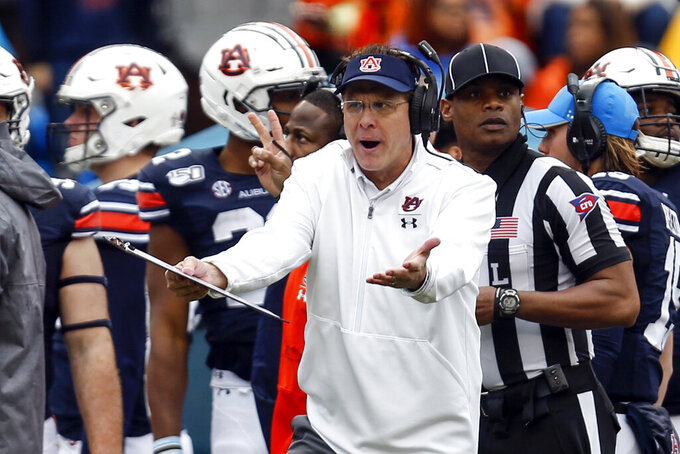 Auburn head coach Gus Malzahn reacts to a call during the second half of an NCAA college football game against Samford, Saturday, Nov. 23, 2019, in Auburn, Ala. (AP Photo/Butch Dill)

Alabama is still hanging around in the playoff hunt, and could help its case with a strong performance. The Tide would still likely need some help in other games. The Tigers are facing their fourth Top 10 opponent and could dramatically change the perception of the season with a win.

Alabama’s offensive line against Auburn’s defensive front. Tackle Derrick Brown and end Marlon Davidson lead a front four that has been arguably the SEC’s best this season. The Tide’s blockers have shuffled around some because of injuries and guard Deonte Brown’s four-game NCAA-imposed suspension to start the season. But the group is led by tackles Alex Leatherwood and Jedrick Wills, Jr.

Alabama: QB Mac Jones is making his first road start and third overall, in place of injured star Tua Tagovailoa. Jones has made some big plays and avoided costly mistakes, throwing for seven touchdowns against just one interception. He hasn’t faced a hostile crowd or a defense as good as Auburn’s, but he does have one of the nation’s best receiving groups.

Auburn: Brown has been a game-changer at times this season, especially in big games. He recovered two fumbles against Florida and the athletic 6-foot-5, 318-pounder is a force as a pass rusher and run-stopper. He and Davidson have combined for 21.5 tackles for loss and 11.5 sacks.

Alabama has won eight of the last 11 meetings. Tide coach Nick Saban is 8-4 in the Iron Bowl, while Auburn’s Gus Malzahn is 2-4. ... Tide defensive linemen Raekwon Davis, D.J. Dale and Phidarian Mathis and wide receiver Henry Ruggs III are aiming to return after being held out of the Western Carolina game. ... Saban is trying to complete his ninth perfect SEC road season at LSU and Alabama. ... The game features two of the nation’s top punt returners. Alabama’s Jaylen Waddle leads the nation with a 24.9-yard average on 19 punt returns. ... Auburn’s Christian Tutt is fourth nationally with 13.8 yards on 19 punt returns.