No. 5 Clemson faces Furman, looks to stay perfect vs. FCS 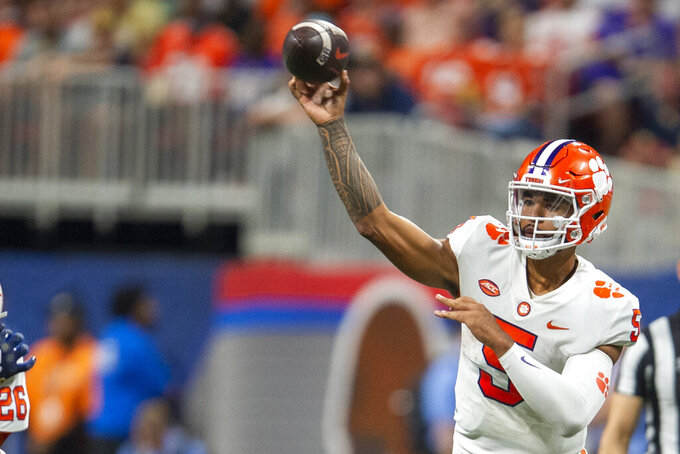 Clemson looks to start 2-0 for the seventh time in eight seasons. The Tigers also look for their 32nd straight win over Furman, a streak that dates to the Paladins last series victory in 1936. Furman, of the Football Championship Subdivision, would have the upset of the season if it can beat the Tigers.

Clemson QB DJ Uiagalelei vs. Furman's defense. Uiagalelei steadily improved in Clemson's 41-10 season-opening win over Georgia Tech on Monday night. He figures not to need so long against Furman, which finished fourth in the nine-team Southern Conference in yards (383) and points (23) allowed last season.

Furman: TE Ryan Miller. He's on the watch lists for the Walter Payton Award and Senior Bowl. He has caught 83 passes for 1,469 yards and 17 touchdowns, a school record for tight ends.

Clemson: DE K.J. Henry. Henry was the most dominant defensive lineman of the Tigers' heralded group in the opener against Georgia Tech with a sack and 2.5 stops behind the line of scrimmage.

Furman was the opposition in Clemson's first football game in October 1896, a 14-6 win by the Tigers ... The two schools are separated by about 30 miles in the Upstate region of South Carolina. ... Clemson has won its past 18 home openers, last losing its Death Valley season debut in 2003, a 30-0 loss to Georgia. ... The Tigers are 36-0 all-time against teams from the Football Championship Subdivision. ... Furman has lost its last six games against Football Bowl Subdivision opponents. It's last such win came in 2015, 16-15, at UCF. ... Clemson has won its past 34 games at home since its last loss there to Pitt in 2016. ... Furman has FBS opponents the next three seasons, facing South Carolina in 2023, Ole Miss in 2024 and Clemson again in 2025.