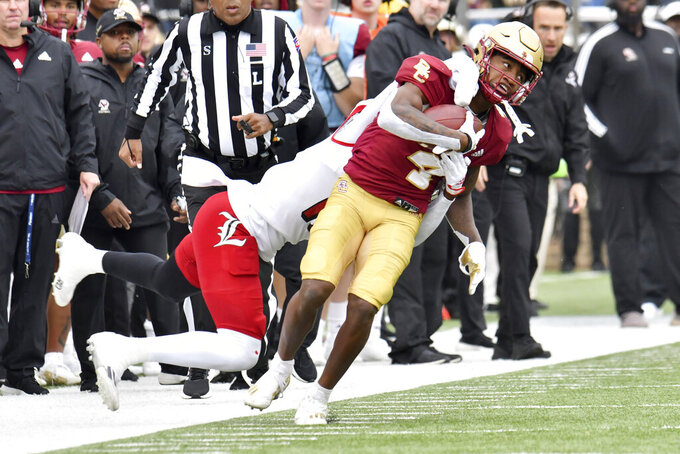 BOSTON (AP) — Boston College coach Jeff Hafley has had to wait — longer than usual — for a game like this.

Hafley arrived in Chestnut Hill just before the pandemic, so Alumni Stadium was empty when the Eagles played second-ranked Notre Dame and No. 12 North Carolina in his first season. Top-ranked Clemson was at Death Valley in 2020, and the Eagles also played a weakened Tigers team on the road last year.

So Hafley is looking forward to what could be the first real marquee game of his BC tenure so far: a national TV matchup against No. 5 Clemson on Saturday night, when the Eagles will honor former BC lacrosse player Welles Crowther, who died in the Sept. 11 attacks.

“You’d like as a coach for the guys to come in and be the same, but it’s not true,” said Hafley, whose team picked up its first Atlantic Coast Conference victory by beating Louisville last week. “They’re a little bit energized, for sure.

“You’ve got the No. 5 team in the country here … I expect it to be a great atmosphere, great night,” he said.

After beating ranked Wake Forest and North Carolina State in back-to-back weeks, Clemson (5-0, 3-0 ACC) could have an open path to the conference title game — and perhaps the College Football Playoff — with No. 22 Syracuse as the only ranked team left on its schedule.

“I feel like we can play to the best of our ability, just like we did the last few years,” said BC receiver Zay Flowers, who caught touchdown passes of 57 and 69 yards last week. “I feel like we can go in and play with them, and maybe even beat them.”

The annual Red Bandanna Game honors Crowther, who was known – and identified afterward – for always wearing a red bandanna. He died in the World Trade Center's South Tower while helping to rescue others.

The Eagles will wear special uniforms trimmed with a bandanna’s familiar paisley pattern.

BC upset No. 9 Southern California in the first Red Bandanna Game in 2014. That was the Eagles’ last win over a ranked team.

Clemson coach Dabo Swinney has plenty of memories of playing at Boston College, perhaps none bigger than the first time as the Tigers interim coach in 2008.

C.J. Spiller, who is now the running backs coach, had 242 total yards in a 27-21 victory, just Swinney’s second game in charge.

“If we don’t win that game, I’m probably not here,” said Swinney, in his 14th full season at Clemson. “They’re all big, you don’t realize how big some are until later on down the road."

Clemson has won both of quarterback DJ Uiagalelei’s starts against BC, including a 34-28 win in 2020 when Trevor Lawrence was out with COVID-19. It was Uiagalelei’s first career start.

BC's first win was an uninspiring victory over Maine of the FCS, so beating an ACC opponent in Louisville was a step forward and the individual efforts were recognized.

Flowers was named the conference’s receiver of the week after grabbing five catches for 151 yards and two long scores. He also improvised on a broken play and ran for 22 yards to set up another touchdown.

Flowers is second in BC history with 2,460 receiving yards, one yard more than his former receivers coach Rich Gunnell.

Tackle Chibueze Onwuka was the ACC’s defensive lineman of the week after blocking an extra point in the one-point victory. He also had a career-high nine tackles — two of them for a loss.

First-year Clemson offensive coordinator Brandon Streeter has watched his players make big plays throughout the season — and that’s given him the confidence to call plays without worrying about execution.

An example was Uiagalelei’s 9-yard scoring run from a bootleg formation that sealed things in the fourth quarter against North Carolina State. The Tigers lined up under center — a rarity in their attack — and Uiagalelei faked a handoff to the middle before sprinting out left and untouched toward the end zone.

“I trust those guys out there on the field and they’re giving me a lot of good feedback,” Streeter said.