No. 6 Alabama meets No. 15 LSU with SEC West lead at stake 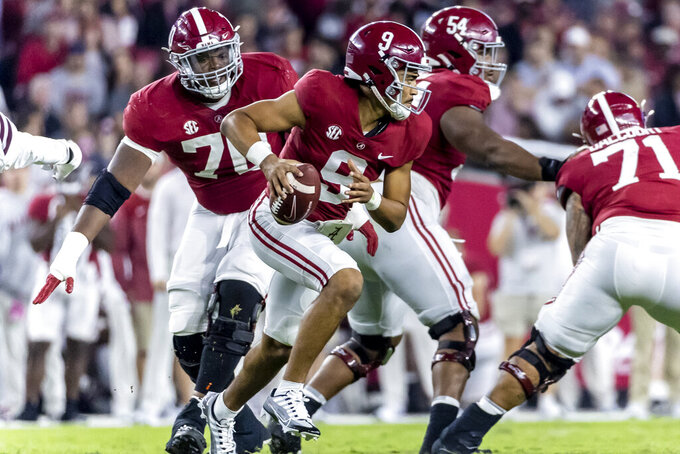 Alabama quarterback Bryce Young (9) rolls out against Mississippi State during the second half of an NCAA college football game Saturday, Oct. 22, 2022, in Tuscaloosa, Ala. (AP Photo/Vasha Hunt)

Line: Alabama by 13 1/2, according to FanDuel Sportsbook.

The winner controls the race for the SEC West crown and a berth in the Southeastern Conference title game. Alabama also needs to win to stay close to the top four in the College Football Playoff rankings. With two losses, LSU is a longshot to climb into a CFP playoff position, but a victory would boost the Tigers' prospects.

Alabama QB Bryce Young against LSU's defensive front. Young’s right shoulder should be in good shape after an open date. He has put up big numbers in nine games against ranked teams, averaging 335.2 yards with 22 touchdowns against six interceptions. The Tigers have largely been effective pressuring quarterbacks, particularly against Mississippi and Mississippi State. But LSU's defense has looked more vulnerable against dual-threat QBs such as Tennessee's Hendon Hooker, Florida's Anthony Richardson and Florida State's Jordan Travis.

Alabama: RB Jahmyr Gibbs is a threat as a runner and receiver. He's rushed for 672 yards and six touchdowns while catching 31 passes for 303 yards and three scores. Gibbs didn’t put up big numbers against Mississippi State. but ran for 473 yards and five TDs over the previous three games.

LSU: QB Jayden Daniels has completed 69.9% of his passes for 1,812 yards and 12 TDs against only one interception. He also has rushed for 524 yards and nine TDs.

Alabama is 29-9-2 all-time in Baton Rouge and hasn't lost there since 2010. ... Alabama has won the previous two meetings, with LSU's last victory coming in Tuscaloosa in 2019, when the Tigers went unbeaten and won the national championship. ... Alabama coach Nick Saban won his first national title as a coach with LSU in the 2003 season. Since leaving the NFL for Alabama in 2007, Saban is 12-4 against LSU. ... This meeting marks the 15th time since 2007 that Alabama and LSU will square off when both are ranked in the top 20 of the AP Top 25, with the Crimson Tide having won 10 of the previous 14 such matchups. ... LSU first-yea coach Brian Kelly is 0-2 in his career against Alabama with both matchups coming while he was at Notre Dame and while Saban was coaching the Crimson Tide. ... Alabama's defense has posted two shutouts (2016, 2018) in its past five visits to Tiger Stadium. ... Edge rusher Will Anderson leads the Crimson Tide in tackles for loss with 12 and sacks with six. ... LSU DE BJ Ojulari leads the Tigers in tackles for loss with six and sacks with four.