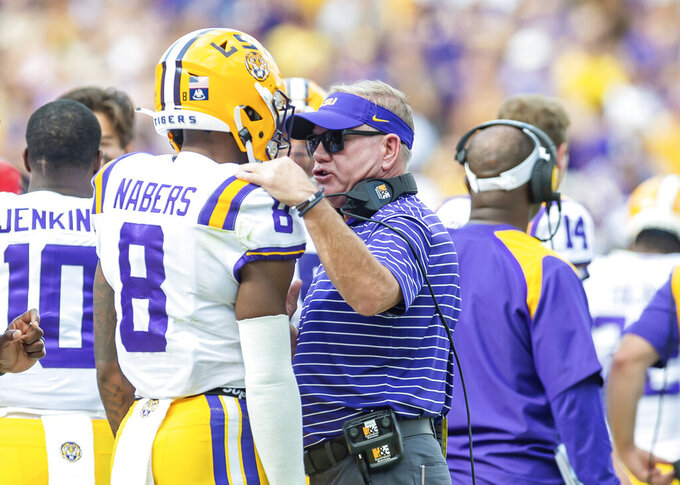 LSU-Alabama has been serious business since Saban’s arrival in Tuscaloosa. It often pits two highly ranked, leading Southeastern Conference Western Division contenders, despite some slipups for the Tigers along the way.

His status as a former LSU coach helped fuel the rivalry early. On the field, the games often didn’t need any extra spice.

The winner, as is customary, is in the SEC West driver's seat. Both teams are tied atop the division standings with No. 11 Mississippi (8-1, 4-1), which has a loss to LSU and hosts Alabama on Nov. 12 after a bye week.

The two teams have represented the SEC West in the championship game 12 times in Saban's first 15 seasons. Auburn is the only other West team to make an appearance since then.

Three of the meetings have gone to overtime and seven have been Top 10 matchups.

The Tide, at least, is still very much in playoff contention and has won 10 of the last 11 meetings. But Joe Burrow and LSU interrupted that streak with a 46-41 win in 2019 in another 1-versus-2 showdown on the Tigers' way to the national title.

This one doesn't necessarily shape up as one of the biggest or most competitive LSU-Alabama games. The Tide is favored by 12 1/2 points, according to FanDuel sportsbook. But Alabama entered last season games as 29 1/2-point favorites and won only 20-14.

Here's a look at a few of the best — and biggest — LSU-Alabama games since Saban arrived in 2007 in reverse chronological order.

—2019. Burrow had his Heisman Trophy moment, passing for 393 yards and three touchdowns to help end LSU’s eight-year string of futility against ’Bama. Then-LSU coach Ed Orgeron said he had been able to tell his players before the game for the first time: “You’re the better team.” It proved true, as LSU was better than everybody that season.

—2012. Alabama beat LSU for the second time in the calendar year. Shut down much of the game, AJ McCarron flipped a screen pass to T.J. Yeldon for a 28-yard touchdown with 51 seconds left to give No. 1 Alabama a 21-17 win over No. 5 LSU.

—2011, regular season. Neither team scored a touchdown in No. 1 LSU's 9-6 overtime victory over the No. 2 Tide. The difference: Alabama kickers missed four field goals. LSU's Drew Allman was 3 for 3. It was the first regular-season meeting of 1-versus-2 SEC teams, but not even the last in this series. Alabama's defense thoroughly dominated LSU in a 21-0 victory in the national championship game rematch.

—2010. Then-LSU coach Les Miles dialed up some fourth-down magic, with DeAngelo Peterson's 23-yard reverse to set up the go-ahead touchdown. The 12th-ranked Tigers won 24-21 after heading into the fourth quarter trailing 14-10 against No. 5 Alabama. Miles even ate a few blades of grass before that play. "I can tell you one thing: The grass in Tiger Stadium tastes best,” he said after the game.

—2008. Saban's first game at Tiger Stadium since leaving after the 2004 season. Alabama clinched the SEC West title with a 27-21 overtime victory on quarterback John Parker Wilson's 1-yard touchdown run. Rashad Johnson had made his third interception of the day to start overtime against the defending national champion Tigers.