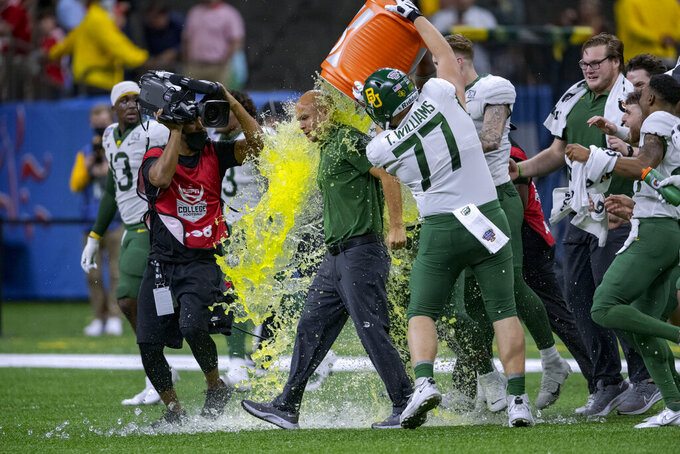 Al Walcott set a Sugar Bowl record with a 96-yard interception return, Monaray Baldwin raced 48 yards for the go-ahead score on an end around, and sixth-ranked Baylor beat No. 8 Mississippi 21-7 Saturday night as injured Rebels quarterback Matt Corral watched from the sideline on crutches.

Abram Smith rushed for 172 yards to finish with a single-season record 1,601 for Big 12 champion Baylor (12-2), which won 12 games in a season for the first time. The defense did the rest, finishing with 10 sacks — two by game MVP Terrel Bernard — and three interceptions.

“I would not put it as necessarily as a point to prove,” Baylor coach Dave Aranda said when summing up the significance of the victory. “I would say it as more of an identity to show. ... Just to take the stage and to take the lights and the crowd and all of that and to, like, be us — all the way, man.

“You want other people to see it,” Aranda continued. “I’m appreciative that we had the opportunity, and we took advantage of it.”

Corral, a dual-threat star QB and projected high-round NFL draft choice, became one of the big stories of the Sugar Bowl because of his decision to play, rather than opt out and minimize injury risks in advance of turning pro.

Corral had accounted for 3,936 total yards and 31 touchdowns during the regular season. But his hopes of going out with a flourish in a New Year's Day bowl faded on Ole Miss' third series, when he was sacked from behind by Cole Maxwell amid a cluster of players. When he was helped up and off the field, Corral didn't put weight on his right foot.

“We were devastated,” running back Jerrion Ealy said. “But we still had a game to play.”

Corral was carted to the locker room for X-rays, which Kiffin said were negative, before returning to the sideline wearing his red undershirt and using two black crutches.

Kiffin said his focus on the game plan suffered when Corral went down.

“Maybe I didn’t do a great enough job with the team because I was really hurting for (Corral) in that situation, because I know how much he’s put into it, how much it means to him,” Kiffin said. “For that to be taken away like that really sucks.”

Freshman quarterback Luke Altmyer took over for Ole Miss (10-3) and led the Rebels to the Baylor 12-yard line on his first series, only to have his pass to the left flat tipped and then intercepted by Walcott, who raced down the right sideline for the only points of the first half. The interception return was the longest in the Sugar Bowl's 88-game history.

The Rebels' defense managed to hold Baylor's offense scoreless through three quarters, allowing Ole Miss to tie it on Altmyer's 37-yard timing pass down the right sideline to Braylon Sanders.

Ole Miss was poised to take the lead when Cole Nation lined up for a 35-yard field goal early in the fourth quarter, but his kick sailed just wide right.

Baylor responded with Baldwin's first collegiate touchdown on a season-long run for the seldom-used freshman, who entered the game with five rushes and one catch.

“The key was getting a quick handoff,” Baylor quarterback Gerry Bohanon said. "We had numbers and leverage and took advantage of that, and that guy, when he gets rolling, he’s rolling.”

Baylor finished with 279 yards on the ground

“In our running back room, one thing that we establish is bully ball,” Smith said. “So we kind of just live by that. It will be a grind, but those 4 yards, 6 yards, they will eventually pop for 20, maybe 40.”

Altmyer's second interception, picked off by safety J.T. Woods on a pass over the middle, set up Bohanon's 2-yard scoring pass to Tyquan Thornton for the game's final score.

“Magnificent defensive performance by them,” Kiffin said. “They outcoached us today. ... Dave has done that to a lot of people, including myself at times.”

After Corral's injury and a pick-6 on Altmyer's first series, the Bears' odds of imposing their style of play on the game only improved. Woods had two interceptions and Baylor held Ole Miss to 322 yards, well below its average of 506.7 coming in.

Ole Miss' defense kept the Rebels close after Corral's injury, shutting out the Baylor offense until less than 12 minutes remained. But with Corral out, Kiffin's offense wasn't the same despite flashes of playmaking by Altmyer, who was 15 of 29 for 174 yards.

“You could definitely see a little bit of a change" in Mississippi's offense, Woods said about when Corral left the game. "He’s their heart and soul.”

It didn't help that first-string place kicker Caden Costa was suspended for a banned substance. Nation missed two field goal attempts, the first from 49 yards in the first quarter.

Baylor: Opens the 2022 season at home against Louisiana Tech on Sept. 3. The Bears have 14 senior starters to replace, including Smith as well as their top two receivers, Thompson and R.J. Sneed. They're also losing Big 12 defensive player of the year Jalen Pitre.

Mississippi: The Rebels open their 2022 season at home against Troy on Sept. 3. Altmyer will be a frontrunner to replace Corral. Ole Miss also will be looking to fill voids at receiver with Dontario Drummond, Jahcour Pearson and Sanders all finishing their careers. Ealy said he's turning pro. On defense, the Rebels will be looking for an edge rusher to replace sack leader Sam Williams, who is moving on to the NFL.