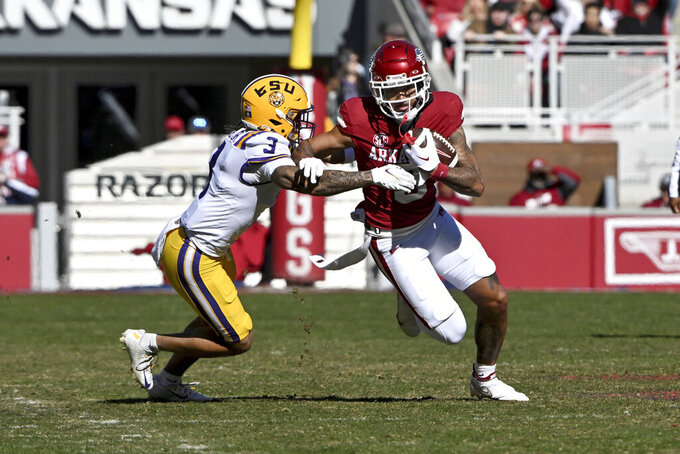 Even though LSU already has clinched a spot in the SEC title game, the Tigers would plummet in the rankings and would no longer be taken seriously as a candidate for one of four College Football Playoff spots if they lost a nonconference home game. The last time UAB won in Tiger Stadium in 2000, the Blazers celebrated wildly on the field after the 13-10 upset. Another upset would make UAB bowl-eligible.

UAB: McBride's average of 156.3 yards rushing per game leads the nation. He's rushed for 100 or more yards in all nine games in which he's played this season and 10 straight dating to last season.

LSU: LB Harold Perkins was named Walter Camp national defensive player of the week for his performance at Arkansas on Nov. 12, when he became just the fourth player in the FBS in the past 15 years to have four sacks and two forced fumbles in the same game.

UAB snapped a three-game losing streak last week, beating North Texas 41-21. ... The Blazers are in contention to become-bowl eligible for a seventh straight season, dating back to before the football program was dropped for the 2015 and 2016 seasons. ... All five UAB losses have come by a touchdown or less. ... UAB's McBride and Brown have combined to rush for at least 2,000 yards and 20 TDs for a second straight season. ... LSU is 5-1 at home this season with its lone loss at Tiger Stadium coming against No. 5 Tennessee. ... LSU has won 60 of 61 nonconference home games since losing to UAB in 2000. The lone loss in that span came against Troy in 2017. ... LSU's Jayden Daniels is one of only three QBs in the Football Bowl Subdivision with at least 600 yards rushing (629) and 2,000 yards passing (2,080) this season. Daniels also is tied for most rushing TDs by a QB with 10.