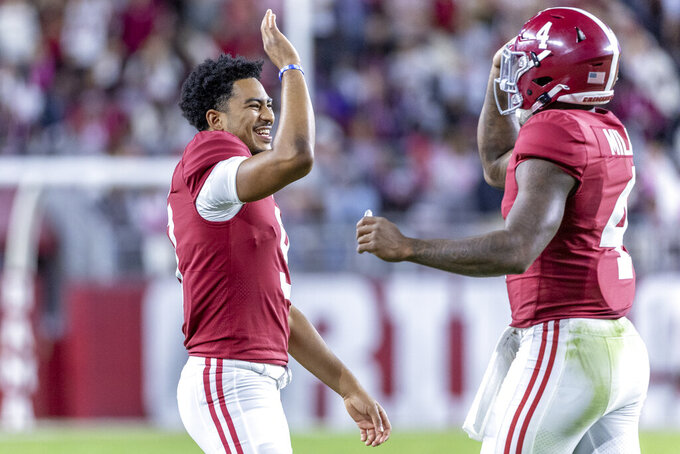 Line: Alabama by 7 1/2, according to FanDuel Sportsbook.

Sixth-ranked Tennessee has a chance to break into the Southeastern Conference's top tier for the first time in many years if the Vols can beat the Crimson Tide. With coach Nick Saban, Alabama has dominated a rivalry that used to be so intense it has its own nickname: the Third Saturday in October. With these teams in separate SEC divisions, a loss would not curtail conference championship hopes.

Tennessee DE Byron Young had 2 1/2 sacks against LSU. No matter who plays quarterback for Alabama, the Tide offensive line must keep Young from causing too much trouble. Alabama has yielded just nine sacks all season. The battle at the line of scrimmage will go a long way toward determining the winner.

Alabama: RB Jahmyr Gibbs. He has come through with QB Bryce Young injured. Gibbs has run for 360 yards on 39 carries the past two games, including his first two touchdowns at Alabama. The Georgia Tech transfer also is a solid receiver who returns kicks.

Tennessee: DB Christian Charles. He will need to step up to keep the Vols' depth issues in the secondary from hurting them. Charles has 20 tackles while starting each game.

Alabama has won 27 straight regular-season games against SEC Eastern Division opponents, dating back to a 35-21 loss at South Carolina on Oct. 9, 2010. That includes a 14-0 road record. ... Saban is 17-1 against the Vols, including a perfect 15-0 record with Alabama. ... A win would move Saban into a tie with Joe Paterno with 27 road wins against AP Top 25 teams, behind Bobby Bowden’s 33. … Tennessee leads the nation averaging 547.8 yards of total offense and also in red zone offense with a perfect 28 of 28. The Vols rank second in scoring offense with 46.8 points a game and 189.15 passing efficiency. … Vols QB Hendon Hooker has thrown 239 passes dating back to last season without an interception … If Hooker throws a TD pass against the Tide, it will be his 18th game with a TD pass and would tie the school record set by Heath Shuler between 1992 and 1994. … This will be the first time since 2016 that two top 10 teams have met in Neyland Stadium. Top-ranked Alabama beat then-No. 9 Tennessee 49-10.