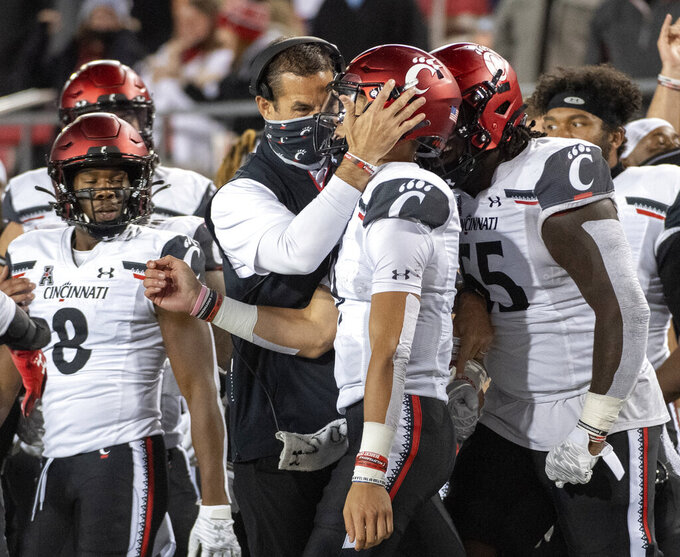 Cincinnati head coach Luke Fickell congratulates quarterback Desmond Ridder after Ridder rushed for his third touchdown of the game during the second half of an NCAA college football game against SMU Saturday, Oct. 24, 2020, in Dallas. Cincinnati won 42-13 and Ridder finished with 179 yards rushing. (AP Photo/Jeffrey McWhorter)

Cincinnati is looking to avenge two losses to the Tigers in the span of eight days last season, including a 29-24 defeat in the American Athletic Conference championship game. While the Bearcats are hoping to keep alive their hopes of earning a College Football Playoff berth, Memphis needs a win to remain in the AAC title race. The Tigers have beaten the Bearcats five straight times.

Memphis QB Brady White vs. Cincinnati’s defensive line. White passed for a combined 486 yards and three TDs in the two meetings with the Bearcats last season. He will face a Cincinnati defensive line that Tigers coach Ryan Silverfield calls the best in the AAC. The Bearcats have 10 sacks, led by junior defensive end Myjai Sanders’ 3 1/2.

Memphis: Junior wide receiver Calvin Austin III is coming off a career game. He had six catches for a career-high 184 yards and a touchdown in the Tigers’ 41-29 win over Temple.

Cincinnati: Junior quarterback Desmond Ridder’s 179 rushing yards last week were a school-record for a quarterback. His 91-yard TD run put the game away in the fourth quarter. He also passed for 126 yards and a touchdown.

Cincinnati has its first top-10 AP ranking since the final poll of the 2009 season when the Bearcats were fourth. … Cincinnati has won 16 straight at home, a school-record and the fifth-longest active streak among FBS schools. … The Tigers went a month between games due to COVID-19. After beating Arkansas State on Sept. 5, they did not play again until a loss to SMU on Oct. 3. … Memphis hasn’t defeated a top-10 opponent since beating No. 6 Tennessee 21-17 in 1996. The Tigers’ last road win over a top-10 team came on Sept. 13, 1975 when they beat No. 7 Auburn 31-20.