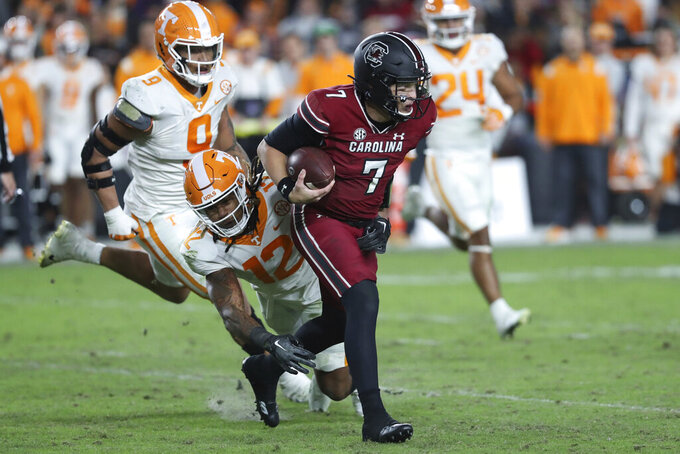 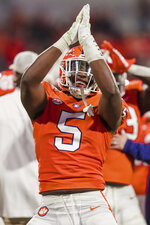 “They played their best game and we played our best game,” Swinney said. “We're two good teams coming off big wins. Both teams have some confidence."

Swinney is glad that both teams are playing well heading into the weekend as No. 7 Clemson (10-1) hosts South Carolina (7-4) with a chance to set the all-time best win streak in a series first played in 1896.

The Tigers have won seven straight over the Gamecocks, matching Clemson's run of success from 1934-40 in the Palmetto State's top sporting rivalry.

But South Carolina comes in with some juice after its unexpected 63-38 demolition of then-No. 5 Tennessee last week.

“I love that they did that,” Clemson tight end Jake Briningstool said. “Them coming in here hot, with a sense of arrogance, is perfect for us.”

Gamecocks quarterback Spencer Rattler knows Clemson will be every bit the challenge Tennessee was and his team will have to have the same hard-working approach it took to beating the Vols if they want to beat a second straight Top-10 opponent.

“I know it's going to be a crazy environment,” Rattler said. “We're just looking forward to the opportunity, coming off a good game, we want to have a great week of practice and focus on us. It's all about us.”

That's not always easy to do. Among the congratulations he got were texts from ex-NFL players Terrell Owens and Archie Manning.

Gamecocks coach Shane Beamer told his players it was time to shut off Tennessee talk. He even told his social media team to quit posting their creative videos or posts on the Vols' win.

Beamer's message to his players about well-wishers: “Thank them, but say we're moving on.”

Clemson has rebounded from its lone loss this season at No. 13 Notre Dame three weeks ago with solid victories over Louisville and Miami to finish off their fourth 8-0 ACC regular season since its championship run began in 2015.

South Carolina pulled off its Tennessee win without its top two tailbacks in injured MarShawn Lloyd and Wake Forest grad transfer Christian Beal-Smith. Lloyd, who still leads the Gamecocks with 556 yards and nine touchdowns, has missed the past three games with a thigh bruise. Beal-Smith, with five rushing TDs, has been out the past two with a foot injury. Beamer said both participated in practice Tuesday.

Rattler and Clemson quarterback DJ Uiagalelei both say they're focused on what's ahead this season instead of on the NFL. The two said this week they'll consider their future after the season.

Briningstool said players call their quarterback “Dead-leg DJ” for the way he carefully jukes defenders when he takes off on QB scrambles. Uiagalelei laughs at the nickname, but has used that style effectively this season. He's gained 308 yards on 105 attempts with four touchdowns on the ground. Uiagalelei led the Tigers with 89 yards rushing in last week's win over Miami.

This is Swinney's favorite week of the season. The Alabama native and member of the 1992 Crimson Tide national championship team, Swinney loves the intensity that surrounds games like Auburn-Alabama and Clemson-South Carolina. “Northwestern and Indiana, they’re probably not having marriages break up over that," Swinney said. "No offense to Northwestern and Indiana.”