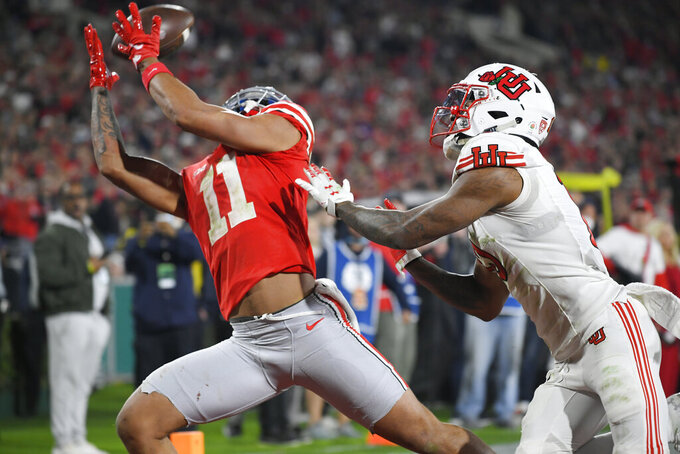 PASADENA, Calif. (AP) — C.J. Stroud and Jaxon Smith-Njigba put on a passing performance that obliterated a multitude of records during one of the biggest offensive days in Ohio State's storied history.

The Buckeyes still barely did enough to hold off resilient Utah and its backup quarterback in one spectacular Rose Bowl.

Stroud capped his record-setting offensive day by leading a 56-yard drive ending in Noah Ruggles' 19-yard field goal with nine seconds to play, and No. 7 Ohio State beat No. 10 Utah 48-45 on Saturday night in the wild 108th edition of the Rose Bowl.

Stroud passed for a school-record 573 yards and a record-tying six touchdowns for the Buckeyes (11-2), who won the Granddaddy of Them All for the second time in four years while toppling one long-standing offensive record after another. Stroud's yards passing and touchdowns both are Rose Bowl records, and he finished 3 yards shy of the record for yards passing in any bowl game.

“It’s emotional for me,” said Stroud, from nearby Rancho Cucamonga. “It’s like I’m dreaming right now. I was able to come home and win the Rose Bowl like this. ... This is the Rose Bowl, man. This is where the legendary games are being played.”

Ohio State created a few more legends on this trip.

Yet the Buckeyes were the ones playing from behind for nearly all of the first three-plus quarters in Arroyo Seco until they summoned the will for three fourth-quarter scoring drives.

“Our team is built on fighting,” Smith-Njigba said. “It doesn’t matter if we’re up, down. We were down the first half, but we just had to stay level headed and keep fighting.”

Ohio State had to rally from 10 points down late in the third quarter to get past the Pac-12 champion Utes (10-4), who got off to an electrifying 35-point first half in their first school's first trip to the Rose Bowl. They even stayed competitive after star quarterback Cameron Rising went down with an injury while getting sacked with 9:56 to play.

The Utes had to turn to backup Bryson Barnes, who grew up on a pig farm in central Utah and had never thrown a collegiate pass. He he led them on a tying drive, capped by a 15-yard TD pass to Dalton Kincaid with 1:54 left.

Stroud coolly drove the Buckeyes back downfield in the waning seconds, and Ruggles hit his easy field goal. Ohio State kicked off to Britain Covey, who already had a 97-yard kickoff return for a touchdown earlier, but the Buckeyes smothered his cutback as time ran out.

“All we needed was 30 more seconds, if that,” Barnes said. “Get down the field, tie it and head to OT. But we didn’t get enough time. ... A lot of dudes are sad, but there’s not a lot to hang our heads on. We’ve been through the lowest of lows and highest of highs, but we made Utah football history today.”

In front of a raucous crowd dominated by Utah fans in the venerable stadium that opened in October 1922, the schools matched the 2012 Oregon-Wisconsin matchup for the highest-scoring first half in Rose Bowl history, combining for 42 points and 443 yards in the second quarter alone.

Ohio State trailed 38-31 entering the fourth quarter despite the pyrotechnics of its passing game, but the Buckeyes immediately stopped Utah on downs at the Ohio State 31, and tied it on Harrison’s 5-yard TD catch with 10:12 left. After Rising's injury, Smith-Njigba made a 30-yard, over-the-shoulder catch for his third touchdown with 4:22 to play.

Rising passed for 214 yards and two touchdowns and rushed for 92 yards and a score while leading the Utes to a 35-21 halftime lead, but he left the game with an apparent head injury. Utah played without three of its top four cornerbacks, even forcing running back Micah Bernard to play defensive back for the first time since high school.

“At some point, we have to play defense,” Utah coach Kyle Whittingham said. “We didn’t play very well all night long on defense. It wasn’t our usual. Not sure we’d be able to get a stop.”

With two top Buckeyes receivers opting out, Smith-Njigba had a landmark day that included TD receptions of 50 and 52 yards made 30 seconds apart — albeit with Covey’s TD return in between.

The 24-year-old Covey’s sensational 97-yard romp through the Buckeyes' coverage unit was the first kickoff return for a touchdown in Utah’s entire bowl history. Covey, who also caught a 19-yard TD pass for the Utes’ first points, arrived at the school in 2015.

The Buckeyes' loss to Michigan in November knocked them out of the national title picture, four key starters opted out to preserve their health for the NFL draft: Receivers Chris Olave and Garrett Wilson, starting left tackle Nicholas Petit-Frere and defensive tackle Haskell Garrett.

Ohio State: A win in Pasadena is always never taken for granted by a Big Ten power. The Buckeyes overcame the instinct to relax after their national title dreams died, and they put on a performance that showed Day's program has tenacity.

Utah: The Utes were agonizingly close to their third New Year's Six victory during their two-decade transformation from a mid-major overachiever to an elite Power 5 program. Despite the loss, the impressiveness of their fight and the size of their traveling fan base confirms Utah has arrived.